In today's Guardian, Will Straw argues that Labour must "pick what it thinks is the right size of the public sector." A wealth tax is one way to protect against cuts.

Alongside a group of “leading leftwing thinkers” including a number of Left Foot Forward contributors, I have a short piece in today’s Guardian outlining where I think “the Labour party should go from here”. I argue:

“The Labour party has to pick what it thinks is the right size of the public sector. Since 1997, public spending has gone up from 36% of national income to 48%. (Before the recession, it was at 42%.) But tax revenues have always been at around 38%, and during the recession fell to around 35%. The reason we’ve got a structural deficit is because Gordon Brown won the argument for investment in public services, but never took on the argument for increasing taxes to pay for it.”

The point is perhaps best made by this graph from the Institute for Fiscal Studies. Where the black and green lines end up is key to what the future of Britain will look like. The Lib-Cons with their series of tax cutting proposals want a smaller state, less redistribution, and a pared down welfare state. If Labour gets its act together, it can limit this scaling back.

This week’s Economist sets out the key strategic challenge facing the Labour party:

“For nothing will make or break the next leader of the opposition like his response to the government’s austerity programme. Oppose it all, and Labour will look incredible. Back it in grown-up fashion, and the coalition will have an easy ride. The tempting third way—supporting “good” cuts but not “bad” ones—will work only if Labour agrees on which bits of spending should go. Underlying this tactical dilemma is the more strategic question of what the left is for when there is no money to spend. Labour’s narrative was once devastatingly clear: the revenues from a buoyant economy should correct the historic underspend on public services. What is it now?”

The Social Market Foundation are on the right track today with a new report titled, “Axing and Taxing” covered in today’s FT. They recommend reducing the deficit with £39.0 billion of spending cuts and £25.3 billion of tax increases. This protects more public spending than under Labour’s plans to reduce the deficit with a 2:1 ratio of spending to tax. Indeed, if one removes from the SMF baseline the Lib-Con measures such as the £6.2 billion cuts to pay for scrapping the £6 billion employer NICs rise, their proposals would mean £32.8 billion in cuts and £31.3 billion of tax increases – close to the 1:1 ratio used by Ken Clarke and Norman Lamont in the early 1990s.

No doubt the SMF’s proposals to means-test child benefit and raise VAT will concern many on the left. But if not these we have to pick something else instead or say how taxes would go up further. In which spirit, instead of the VAT rise, which would be deeply regressive, I would instead pick a wealth tax. As the Political Climate blog points out, “recent data from the ONS show that the top 10% of households own more wealth than the rest put together”. Right-wing blogger Tim Worstall kindly points out the risks of capital flight. One way around this is to target the tax at land, which is hard to move. In an article for Prospect earlier this year, Philippe Legrain called it the “only efficient and fair way to bring Britain’s finances back into line”. After all, 0.3 per cent of Britain’s population owns 69 per cent of its land.

Alex Barker at FT Westminster picks out an intriguing graph from the SMF report to argue that a modest rise in VAT would actually be progressive if measure on an expenditure basis. It is certainly true that many in the bottom income decile are not the poorest in society since they are students, those on sabbatical, or self-employed people suffering from a bad year who are able to smooth their expenditure by borrowing or using savings. But there are arguably more people at the bottom of the income scale who bolster their expenditure by borrowing beyond their means. Expenditure rankings also say nothing about miserly Mr Scrooges at the top of the income scale. The SMF graph which caught Alex Barker’s eye is actually from an IFS report. They are careful to say only that the expenditure analysis gives a “different picture” rather than a better one.

And while we’re on the subject, this graph from the IFS shows that whichever way you cut it, removing exemptions to VAT – another SMF idea – would be regressive. 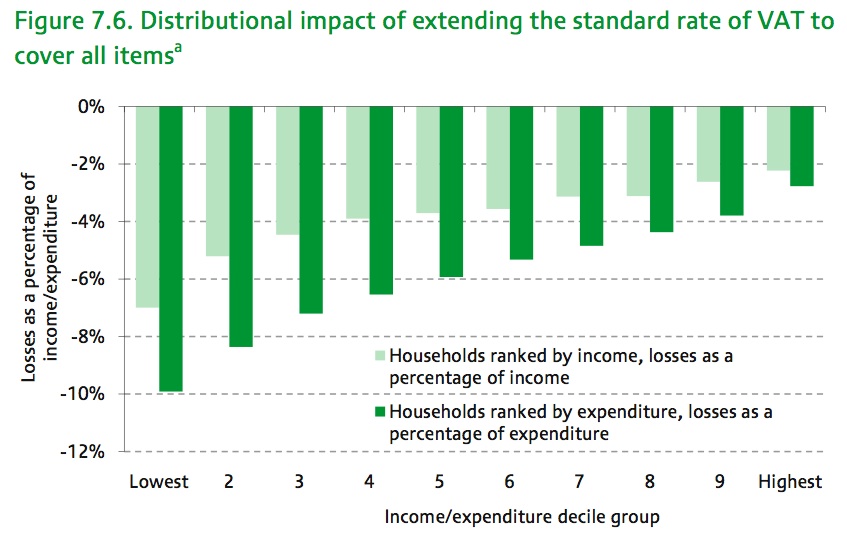 48 Responses to “To defend the cuts, Labour must be clear about the size of government”