The recent Budget will not reduce the deficit. The experience of Thatcherism in Britain demonstrates that it won't, as well as the more recent experience of countries such as Ireland and Greece. 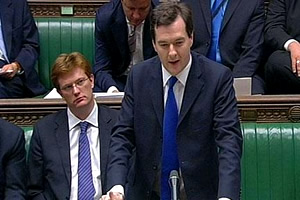 The recent Budget will not reduce the deficit. The experience of Thatcherism in Britain demonstrates that it won’t, as well as the more recent experience of countries such as Ireland and Greece. It was also the experience generally in the 1930s. Some on the Left have put forward the argument that the cuts should be implemented more slowly and more fairly while others have argued for investment not cuts as the way out for the crisis.

Here, the aim is to examine the economics of the cuts.

Mrs Thatcher inherited a level of Total Managed Expenditure of 45.1% of GDP. Over the next five years the TME was on average just over 47% of GDP (all data from the Budget 2010 Redbook unless otherwise stated, Table C16). TME didn’t fall below the inherited total until 1986/87. And the way it was achieved was by collapsing public investment, which had averaged 4.2% of GDP in the 5 years before she took office, and averaged just 1.7% of GDP in the following five years.

In fact, one of the key characteristics and legacies of Thatcherism is a rate of public investment chronically below the rate of depreciation, with investment not exceeding the latter until 2004/05 (Treasury Public Finances Databank, C1).

Public sector current expenditure – which, along with public investment comprise the TME – actually rose under Mrs Thatcher, despite her savage cuts, from an inherited level of 38.2% of GDP to 41.1% in the following five years.

Finally, on the deficit itself, Thatcher inherited a current budget deficit (excluding interest payments) of 2.5% of GDP. But that was following the turbulent year of the Winter of Discontent. In the previous nine years the average Budget position was a surplus of 0.4% of GDP. In Thatcher’s first 5 years the average deficit was more than 1.8% of GDP (Table C15).

Government finances at the time also benefitted hugely from the bonanza of North Sea oil revenues. In her time in office these amounted to an enormous 17% of GDP. (databank, C1). Without that windfall, the total level of debt would also have risen.

So, overall spending rose under Thatcher and current spending also rose. The deficit eventually narrowed only because investment fell, to below the rate of depreciation, and stayed there. But no-one seriously argues that the British economy invests too much, still less that excessive public investment is the source of deficits and debt. Then, as now, the argument is that current spending is too high, and must be slashed. But spending was slashed, and yet it rose as a proportion of GDP, and without North Sea oil revenues both the deficit and the debt would have risen.

So, how did it happen that current spending actually rose? The simple answer is cuts don’t equal savings. Cuts don’t even lead to fractional savings.

They lead to increased costs (increasing the numbers of those eligible for benefits even while cutting those benefit entitlements) and lower tax revenues; moreover, Treasury and CSO analysis tells us that’s what will happen.

In the calculations above 1 is the change in government spending (say, £1bn). In A, 1.509 is the ‘Leontief Inverse‘, identified by the CSO as the impact of government spending on public administration on total demand in both the public and private sectors (pp.21-22). This is more commonly known as the ‘multiplier’. The total demand for transport, manufacturing, finance, education, etc. are all stimulated when the government spends £1bn on public administration, to the amount of £509m.

In B, 1.854 is the multiplier attached to government spending on education, health and social work. So, when government stops spending on these areas, as with the the Building Schools for the Future programme the private sector is also hit, reducing its investment and jobs. Conversely, a modest level of increased investment in higher education yields huge returns for the government in the form of income tax and reduced welfare payments as it increases graduate employment.

In both A & B, 0.75 represents the return to government finances after two years from every change in GDP. (Treasury, Public Finances and the Cycle, Treasury Economic Working Paper No. 5, November 2008). Of that, 50% is taxes, and the rest is welfare spending.

These calculations hold good if government spending is cut or if it is increased. So, just to take the lower multiplier in A, if government spending is cut by £1bn in public administration, total demand in the private sector will decline by £509m and in the economy as a whole by £1.509m. Government finances will suffer by 75% of that, by £1.13bn; so, the net result will be a deterioration in government finances of £130m. That is, a wider deficit not a narrower one.

The reverse is also true. If, say, the government increased its spending in education, healthcare and social work by £1bn, the rise in total demand would be £1.854bn and the improvement in government finances would be 75% of that, or £1.39bn – that is a net return of £390m, thereby reducing the deficit, or providing further funds for renewed investment.

The operation of these officially-calculated mechanisms explains why Mrs Thatcher couldn’t cut the deficit by spending cuts and why Mr Osborne won’t either. His cuts are more than twice as deep as Mrs Thatcher’s and will probably lead to a wider deficit.

From a strictly economic perspective it makes no sense to opt for slower or fairer cuts, outside of areas which have a multiplier less than zero, such as military spending. The policy which will actually reduce the deficit is investment.

62 Responses to “Cuts won’t reduce the deficit – investment will”