Business investment is stagnating. Coalition policies look set to exacerbate the problem and will do little to help the economy meet OBR's ambitious estimates. 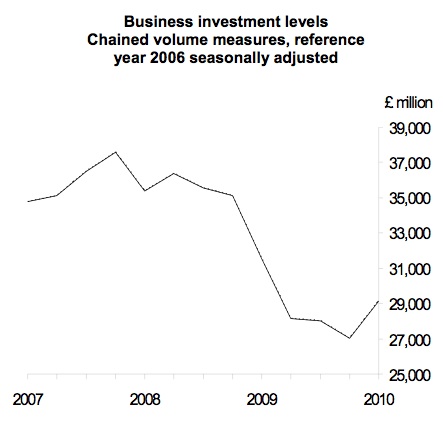 New data out today for January, February, and March suggests that business investment is stagnating at around £27 to £30 billion – nearly a quarter below their peak level. Coalition policies look set to exacerbate the problem.

As the graph shows, business investment has failed to rebound to anywhere near the peak levels of 2007 and instead is stuck below £30 billion. It is still down 7.7 per cent on this time last year and down 22.4 per cent on its peak level – although it went up slightly on its trough last month.

Total manufacturing investment, meanwhile, continues to fall and is down a further 0.2 per cent on the last quarter of 2009 at £2.4 billion. It is now down 37.6 per cent on its peak. Most of the rise in business investment is due to growth in service sector investment.

It will certainly be interesting to see the Q3 data later in the year when we will get some indication of how the Coalition’s policies start to affect the numbers. The Government has recently cut industrial support including the loan to Sheffield Forgemasters; announced the end of Regional Development Agencies; and cut investment allowances which was described by the Institute for Fiscal Studies as likely to favour “supermarkets over manufacturers“.