Left Foot Forward has consistently argued against Tory scaremongering that a hung parliament would necessarily lead to economic catastrophe. 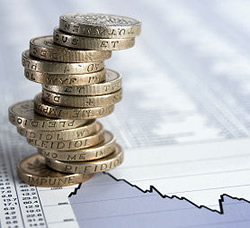 Left Foot Forward has consistently argued against Tory scaremongering that a hung parliament would necessarily lead to economic catastrophe. The real test of this came this morning, when the UK’s Debt Management Office ran a gilt auction – effectively, the government today went to market to ask investors to lend it £2.25bn for the next 17 years. There is no better assessment of how the country’s debt is viewed – equity markets and sterling are currently caught up in the much more significant volatility hitting world markets.

If the auction had gone badly, and investor appetite had been weak enough to force up the cost of borrowing for the government, we would have a clear sign that the wrangling our politicians are currently mired in was a matter of serious concern to markets.

It turns out that there was more than twice as many investors wanting to lend to the government than was needed – a level of oversubscription that exceeds the level of investor interest seen before the election. Further, the interest rate set ended up being a few basis points lower than was paid last year, and well within the normal range for such a long-term investment. In summary, there is no shortage of investors who have faith in the UK’s ability to continue to pay its debts.

In this time of tremendous political uncertainty, there can be no clearer sign that markets remain relatively comfortable that whatever coalition emerges from the discussions in Westminster, the deficit will be dealt with. This is a real vote of confidence for those currently negotiating our political future and, potentially, for those who advocate a more consensual style of government going forward.

Unfortunately it seems that the only people who think the IMF are going to be called in to the UK are George Osborne and Ken Clarke, which doesn’t say a great deal about their confidence in either this country, or, indeed, themselves.

6 Responses to “More evidence of market confidence in the UK”