A BBC survey of economists reports that they expect value added tax to rise from 17.5 to 20 per cent. 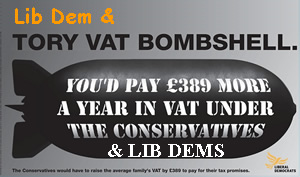 A BBC survey of economists reports that they expect value added tax to rise from 17.5 to 20 per cent and the Telegraph reports that Robert Chote of the Institute for Fiscal Studies predicts that this will be in the summer Budget. If true, this news sets the first test of the coalition’s claims that they are going to “protect those on low incomes from the effect of public sector pay constraint and other spending constraints”; but how will the living standards of people living on benefits be protected?

Older readers will remember that one of the first things the last Tory government did was to raise the standard rate of VAT from 8 to 15 per cent. Last year, when the Labour Party predicted a Tory government would raise VAT to 20 per cent, Andrew Lansley insisted there was “absolutely no such plan” and William Hague said there were “no plans in existence” – though he refused to rule it out.

There are a couple of points to note about raising VAT. One is that increasing taxes threatens the recovery just as much as cutting spending – both take demand out of the economy at a time when growth is well under 1 per cent. I suppose you could say we’ve just fought and lost an election on that point, so there’s a limit to how successfully this horse can be flogged.

But it is interesting that the Liberal Democrats – who were on the right side of this argument, unveiling a poster during the election campaign attacking the ‘Tory VAT bombshell’ – seem to have abandoned it without too much fuss.

The other concern is the impact of VAT increases on poverty and inequality. Compared to raising direct taxes like income tax, increases in indirect taxes like VAT have a much bigger impact on people with low incomes. As the Office for National Statistics has pointed out, direct taxes are progressive; they “contribute to a reduction in inequality”. Indirect taxes, on the other hand:

“Have the opposite effect to direct taxes taking a higher proportion of income from those with lower incomes, that is, they are regressive.”

If there are no measures to balance this impact, an increase in VAT will make inequality worse. It will also deepen poverty – VAT accounts for over 7 per cent of the spending of people in the bottom quintile, with no other source of income than benefits they will have few alternatives to cutting already low levels of spending when prices rise.

The most worrying thing of all is that there has been no mention in any news story of an increase in benefits and tax credits to protect the poorest. The last Conservative government actually froze benefits when it was trying to cut public spending and Robert Chote has warned that the coalition agreement:

Both parties in the coalition government claimed to be pro-poor in the election. The Liberal Democrats have made this claim longer and more convincingly than the Conservatives, so I suppose the onus of responding to this criticism lies most heavily on them. Will they promise not to cut or freeze benefit rates? And will they commit to increasing benefits and tax credits to compensate for any increase in VAT?