The Lib Dem income tax plans will usher in the biggest increase in income inequality in the UK of any single policy since Nigel Lawson’s 1988 tax-cutting budget. 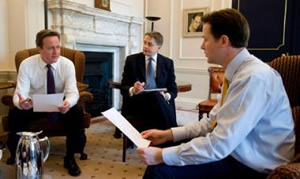 Our guest writers are Tim Horton, research director of the Fabian Society and Howard Reed of Landman Economics

Has anyone noticed how the Lib Dems’ catchy proposal to raise the income tax threshold to £10,000 has very quietly changed? Back in the old days – when the Libs were a progressive party of the left – the proposal was for a ‘tax switch’, taking £17 billion off the super-rich (highly progressive) to fund the cut in income tax (itself highly regressive).

But now it’s just become the tax cut. The Lib Dems have agreed to drop many of the progressive measures to pay for it, such as a mansion tax and scrapping higher-rate pension relief. And it looks instead as if the revenue will come mainly from public spending cuts – making the overall effect even more regressive.

If delivered, it could usher in perhaps the biggest increase in income inequality in the UK of any single policy since Nigel Lawson’s 1988 tax-cutting budget.

Perhaps most concerning, though, is that we seem to be getting an uncritical acceptance by many news correspondents of the Lib-Con spin – that this is somehow a tax cut “targeted on those on low incomes” or “particularly to help the low paid” (to name but two we’ve heard in the last 24 hours).

But – as we pointed out in our analysis of this tax cut before the election – this claim is totally bogus:

• First, raising tax thresholds doesn’t help the poorest because they don’t have enough to pay income tax. Though the tax cut would cost £17 billion, three million households in the poorest quarter of the population would get not a penny of help. That includes the majority of pensioners. We notice some Lib Dem election leaflets sold this policy as “£100 for pensioners”. But it wouldn’t be. It would be £100 for the richest 40% of pensioners and nothing for the poorest 60% of pensioners.

This is why, lest we forget, Labour introduced the Winter Fuel Payment – not just to help with heating costs, but to provide a universal flat-rate payment that would help all pensioners without excluding the poorest. Let’s hope the Tories and Lib Dems don’t follow through on their sabre-rattling hints that they’d like to cut it.

• Second, the vast majority of this revenue goes not on cutting tax for the low paid, but cutting taxes for richer households. Some 70% of the benefit goes to the top half of society. And only £1 billion of the £17 billion cost – just 6% of the total – actually goes on the often-stated aim of “lifting those on low incomes out of tax”.

In a nutshell, saying you want to raise the tax allowance to £10,000 to help the low paid is a bit like saying you want to eat the cake with the cherry on top to increase your fruit intake. It is disingenuous. For any given amount of revenue, you could help those on low incomes far more by spending it on tax credits or public services than you could by spending it on increasing the personal allowance.

By the way, we have absolutely no problem with doing more to help middle-class households. Quite the opposite. But we think there’s something unfair about spending billions on financial support to middle-income households while excluding the poorest, particularly when there are alternative vehicles that avoid this problem, such as tax credits.

If the Lib Dems and Tories were serious about helping the low paid, they would strengthen the near-universal system of tax credits, not undermine it by cutting it back.

• Finally, the Lib Dem tax cut would give more to richer households than to poorer ones, as the graph below shows. Households near the top of the income spectrum would get on average four times as much as the poorest. The result would be a large increase in income inequality in society – especially between the bottom and middle (relative poverty).

Interestingly, Michael Howard considered an increase in the personal allowance for the Conservative manifesto in 2005. He rejected it as being too unfair. Meanwhile, many on the Tory right have long been campaigning to get this policy adopted – most recently Norman Tebbit, and before that Maurice Saatchi. (Indeed, if anyone wants a forensic analysis of why this Lib-Tory tax cut would be unfair, we can do no better than direct them to David Willetts’ excellent response to Lord Saatchi in 2005.)

The truth is that this tax cut was not a painful concession that the Tory right had to make. It is something they have wanted for years. The Taxpayers’ Alliance are delighted it has survived the horse-trading: “It’s good news that the Liberal Democrats have forced the Conservatives to take up their Income Tax policy,” they have just announced, adding that “it was among the most radical tax policies put forward during the campaign, and the Conservatives really missed a trick by not making it their own in the first place.”

And what about the Lib Dems themselves? When we produced our analysis in March, we were treated to a barrage of criticism from Liberal Democrat activists (even though our main points were subsequently validated by the Institute for Fiscal Studies’ own analysis). Their central complaint, however, was that we hadn’t taken into account the fact that the measure was being funded by taking huge amounts of money off the super-rich.

James Graham’s comments over at the Social Liberal Forum were typical:

“The fact that raising the tax threshold helps people on higher incomes more than people on low incomes is not, believe it or not, a startling revelation. We know. The party has never tried selling this policy in isolation; we’d be mad to attempt to because people would rightly ask where we propose trying to find £17bn. The two are meant to balance each other; that’s why we are calling for a tax shift and not either a rise or reduction in taxes overall.”

Well, sadly, it now looks as if the Lib Dems were only really interested in the tax cut. We don’t hold out any hope for the Libs to change their minds on this now they’ve teamed up with the Tories. But could the media please stop describing it as ‘a measure to help the poorest’?

For full analysis of the Lib Dem tax cut, see our report, “Think again, Nick! Why spending £17 billion to raise tax thresholds would not help the poorest”.