Tough talk may win votes, but it doesn’t create jobs. The reality is that continual investment is what is needed to Get Britain Working. 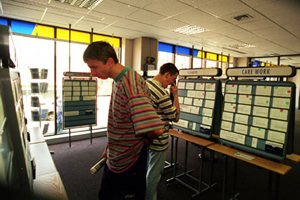 As the IFS has claimed today, and Graeme Cooke discussed on Left Foot Forward yesterday, in many areas there is little between the parties on welfare reform, but there are some key differences that are important to recognise: the Conservatives are proposing a significantly harsher benefit sanctions regime and the introduction of a workfare programme (rather than a Job Guarantee).

At present, claimants incurring benefit sanctions start upon an escalating system, which imposes sanctions of two then four then 26 weeks. Sanctions involve the complete loss of benefit (apart from where claimants – such as pregnant women and disabled people – are eligible for hardship payments) and can be imposed in circumstances including claimants giving up places on training schemes, refusing employment, losing work through misconduct, refusing to comply with a jobseekers direction or leaving employment voluntarily.

The Conservatives’ proposals appear to involve increasing the length of the sanctions that can be imposed – so that the escalation regime starts with a four-week sanction, increasing to 12 then 156 weeks.

“In terms of the labour market behaviour effects of the sanctioning regime, for the lone parents in this study, the effects could be reasonably summarised as negligible.”

In part this is because many claimants don’t understand what the sanctions regime is – in one DWP study 32 per cent of survey respondents claimed not to have been told about the possibility of sanctions; this lack of understanding rises as the needs of clients increase – in one evaluation 47 per cent of clients with literacy problems stated they had little or no understanding of the system.

But even where sanctions are understood they do not always have the intended impacts, often leading to unintended outcomes, demotivating claimants and creating “a number of barriers to finding work” including fear of applying for unsuitable or unwanted jobs (in case a sanction is incurred for leaving it) and reducing the amount of money claimants are able to spend on job-search activities, especially travelling to interviews or to the job centre.

It is also vital to remember that sanctions can cause real poverty – risking severe hardship for families as well as making it significantly more likely that claimants will completely disengage from welfare to work services, increasing the risk of permanent worklessness. In one recent report, the DWP found in particular that “sanctions were also thought to have a knock-on effect on the children of those customers sanctioned”, preventing them from taking part in activities such as school trips and leading them to pick up the emotional anxieties of their parents.

In this context, and particularly in a labour market where lack of jobs is a key factor in high unemployment, a further tightening of the sanctions regime looks unlikely to have significant impacts on employment rates – but extremely likely to increase poverty and persistent worklessness.

Many of the same criticisms apply to workfare schemes, which require people to work full-time in return for their benefits. With a high risk of disengagement, these programmes – which are proven to be “least effective in getting people into jobs in weak labour markets where unemployment is high” – can in fact reduce employability by stigmatising participants and reducing the time they have available to search for real jobs on the open labour market.

Tough talk may win votes, but it doesn’t create jobs. The reality is that continual investment in labour market interventions – and in the wider economy – are what is needed to Get Britain Working.