New research by the IFS outlines that "income tax cuts are not well targeted to help the poorest in society". It corroborates research last month by Left Foot Forward. 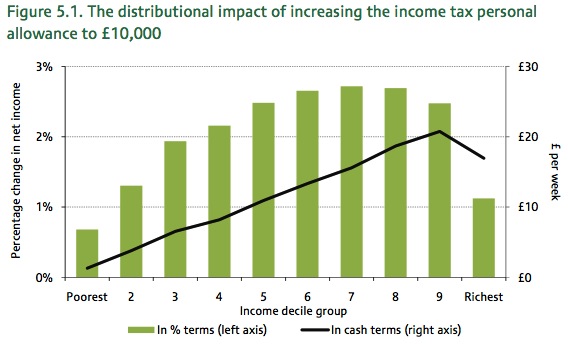 Last month, Left Foot Forward posted a blog highlighting research by the two of us, which argued that the Liberal Democrats’ manifesto pledge to spend £17 billion increasing the income tax personal allowance to £10,000 “fails the fairness test”. Among other reasons, we argued that:

• It would do nothing to help the very poorest, who don’t have incomes large enough to pay income tax;

• Only around £1 billion of the £17 billion cost of the policy actually goes toward the stated aim of lifting low-income households of the tax;

• Households in the second-richest decile would gain on average four times the amount that those in the poorest decile gain; and

• The policy would increase socially damaging inequalities between the bottom and middle of the income distribution.

The well-respected Institute for Fiscal Studies published its assessment of the parties’ spending plans on Tuesday. Their distributional analysis reaches similar conclusions to ours. As the IFS puts it, “these figures are a reminder that income tax cuts are not well targeted to help the poorest in society… in isolation, this giveaway could not be described as progressive.”

As we pointed out in our earlier publication, the Liberal Democrat manifesto also contains a number of revenue-raising measures that are progressive and welcome – for example, the ‘mansion tax’ on domestic property values above £2 million, and measures to tackle tax avoidance measures. Many have criticised using some of these measures to fund a permanent tax cut on the grounds that the revenue is either unidentified (in the case of the anti-avoidance measures) or potentially variable (in the case of the green taxes or restricting pensions tax relief, where revenue is dependent on behaviour not changing). And it should be said that other parties are also seeking to raise revenue from sources like high-value property and tackling tax avoidance. Nevertheless, these measures are in theory highly progressive.

But this in no way changes the fact that there are much better ways of spending £17 billion than delivering a tax cut that fails completely in its stated aim of “offering real help – and hope – to millions of low income families”.

“Broadly speaking, the Liberal Democrat package would redistribute from the well-off to middle-income families – augmenting the progressive pattern of Labour’s pre-announced measures but doing little for the poorest households. This latter feature might appear odd given the Liberal Democrats’ often-expressed anger at the relatively high rate of tax paid on the gross income of the poorest households.”

Our own report had described the irony of the Lib Dems justifying their tax cut by using the fact that the poorest in society pay a higher share of their gross income in tax than everyone else. Not only does this tax cut do nothing for the poorest, but because on average it gives more proportionally to richer households than to poorer ones, it would increase the differential between what the poorest pay and what everyone else pays.

So we renew our call on the Lib Dems to replace this proposal with a fairer alternative – or, at least to stop selling it in terms of ‘fairness’. We note that some Lib Dem election leaflets during this campaign have inaccurately described this proposal as being worth “£100 to pensioners”. But, of course, it is only worth £100 to pensioners who pay income tax – roughly, the richest 40 per cent of pensioners. This policy would give some support to the richest 40 per cent of pensioners and nothing to the poorest 60 per cent.

You can download “Think Again, Nick! Why spending £17 billion to raise tax thresholds would not help the poorest” here.