Shocking new revelations about the leader of David Cameron's MEPs Michal Kaminski, namely that he was "active in a 1500 strong neo-Nazi skinhead movement". 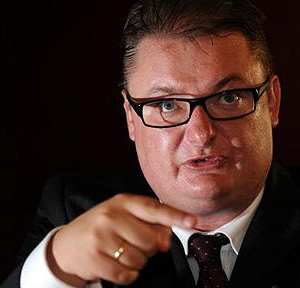 Today’s New Statesman carries shocking new revelations about the leader of David Cameron’s MEPs Michal Kaminski – that he was “active in a 1500 strong neo-Nazi skinhead movement”. The latest claims are unearthed by Polish professor Rafal Pankowski, an adviser to Labour MEP Richard Howitt, who is campaigning against Holocaust denial.

Pankowski, author of “The Populist Radical Right in Poland: The Patriots”, also reveals that Kaminski’s denial of Polish responsibility for the mass execution of Jews during the second world war is directly linked to the emergence of Holocaust denial in Poland. The book claims that:

“From political obscurity to the heart of mainstream politics, the recent rise of the extreme right in the Polish context surprised many observers. In the 1990s Poland was usually referred to as a country without significant extremist or populist movements. It was considered to be a stable, even if young, democracy, and ‘extremists’ were perceived as just a little nuisance to the liberal-democratic consensus.

“By the mid-2000s, the picture changed completely, two populist radical right parties entered into a coalition government with the right-wing conservative Law and Justice Party. All of a sudden, racist extremist affiliations were not a hindrance to a high-level career, but were tolerated or even seemed positively valued.“

Writing in the NS, Howitt says that Kaminski’s Law and Justice party:

“Displayed ‘authoritarian tendencies’ during its brief period in government in Poland from 2005 to 2007. Variously, it used the secret services to quash intellectual opposition, took complete control of state broadcasting and engaged in the “systematic” recruitment of right wing extremists and former members of “skinhead groups” to top government positions. The party’s leaders are shown to be personally responsible for the illegal phone tapping and arbitrary arrest of political opponents.

“School children also found ‘unpatriotic’ authors, along with books by Goethe, Kafka and Dostoyevsky, removed from their reading lists as part of an attempt at the “purification of Polish culture”. Science lessons taught that Darwinism was “a literary fiction”. The crude fantasy propagated by Law and Justice that the Solidarity leader Lech Walesa conspired with, rather than helped defeat communism in Poland demonstrates how little truth matters to them.

“Their call for the recriminalisation of homosexuality… together with calls for the reintroduction of the death penalty, are absolutely contrary to Poland’s membership of the European Union… Kaminski’s well-publicised visit to a “Friends of Israel” event at last year’s Conservative Party conference are shown to mirror the party’s previous attempts to shed its Nazi label by making overtures to Israel. These didn’t prevent Law and Justice alleging that Israel was responsible for the Iraq war and that the 9/11 bombing was part of a Jewish conspiracy…

Also this morning, The Economist, itself opposed to the Lisbon treaty, puts the boot into the Tories, saying “it is not hard to see why many continental Europeans and some Britons worry that a Tory government would be a platoon of little Englanders”. Criticising David Cameron’s decision to leave the mainstream European People’s Party to join up with Kaminski’s European Conservatives and Reformists grouping, it says:

“This newspaper has no regrets about opposing both the draft EU constitution and the Lisbon treaty. It remains appalled about the way the reform was pushed through without a referendum in Britain. But given the choice between putting up with a mildly awful treaty (and the moderately ineffective politicians it has installed in Brussels) or getting out of the EU, we would far sooner stay in. By contrast 40% of Tory candidates favour either “fundamental” renegotiation of Britain’s membership or withdrawal.”

Canvassing opinion in Europe, The Economist reveals that:

“This newspaper recently conducted an unscientific survey of around two dozen Berliners who might be described as Germany’s elite. The various politicians, bureaucrats and businesspeople disagreed about many subjects. But on one thing they were firm. The election of a Conservative government in Britain would be a disaster. Their contempt for the Tories as ‘myopic, ignorant little Englanders’ was matched only by their fear that David Cameron’s party was hellbent on destroying the European Union.“

And another article adds that Cameron:

“Has been (rightly) criticised for pulling his party out of the centre-right grouping in the European Parliament to which the parties of Mrs Merkel and Nicolas Sarkozy, the French president, belong, and for cultivating the Euroscepticism of his party faithful.”