As the person responsible for drafting the Lib Dem manifesto I wanted to respond to the report on our proposal to raise the income tax threshold to £10,000. 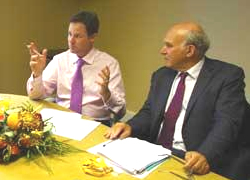 Our guest writer is Danny Alexander, Liberal Democrat Member of Parliament for Inverness, Nairn, Badenoch and Strathspey. He writes in response to “Think again, Nick” by Tim Horton and Howard Reed

As the person responsible for drafting the Liberal Democrat manifesto I wanted to respond to the report on our proposal to raise the income tax threshold to £10,000 – paid for by closing loopholes that unfairly benefit the best off, a new mansion tax, a crack down on tax avoidance and an increase in aviation duties. The report is an interesting contribution but I disagree completely with its conclusions.

Let’s start with some simple facts. Under Labour, the poorest 10% pay 48% of their income in tax while the richest pay just 34%. That is a staggering record of unfairness from a government that claims to put the needs of those at the bottom first. During Labour’s 13 years of failure in office, that gap has widened.

The tax bill for the poorest 10% of families includes £270 in income tax. Our proposal would mean that bill was £0. I think every family we would help would welcome that. The next decile pay £599 in income tax; again that would become £0.

No: you cannot completely fix the unfairness in the tax system by these changes. But the £1bn this will provide to the worst off will make a huge difference to those people, and should not be dismissed. The report suggests it would be better to spend the money released from our tax rises on tax credits. This fails to recognise that tax credits do not benefit the poorest the most either – the second, third and fourth decile all get more than the bottom one.

And, crucially, tax credits increase the poverty trap. When you add up income tax, national insurance and tax credit withdrawal the poorest face a marginal tax rate of 70%. Add in lost council tax benefit, and housing benefit and marginal tax rates can easily reach 92%. For someone earning the minimum wage that would mean an extra hour’s work earns you about 50p – I wonder if the report’s authors would bother working for such a pittance.

If we take away the 20% income tax for those workers, as we will for all those earning less than £10,000, suddenly work becomes much more worthwhile again because you get to keep more of the money you earn. Dealing with poverty isn’t about handouts, it’s about helping people build their own routes to a better life.

Of course, tax credits when they work can make a real difference, which is why we will continue them, unchanged, for the bottom 80% of recipients, phasing them out from the top 20% of claimants. Horton and Reed may not care of course, given these families are not in the bottom decile, but for those who do care about people on middle incomes too, I can assure you that none of those claimants will be worse off because every one will get their £700 tax cut, too.

The report says that it is entirely reasonable to assess this policy in isolation: nonsense. The absurdness of the proposition is proven because the report assesses Labour’s reforms in their entirety not in isolation. Indeed they have on page 27 it compares a graph assessing this single Lib Dem policy against the whole of Labour tax and benefit reform since 1997. This policy is one important part of our overall package for a fairer Britain, and should be considered as such.

Of course you cannot solve poverty, especially extreme poverty, solely through income tax cuts. We never suggested you could. That is why we have a whole manifesto of ideas for improving the lives of people in Britain, including the most disadvantaged.

That includes Council tax, the most unfair tax of all, which takes no consideration of people’s ability to pay with the poorest households paying almost 3 times as much of their income as the richest. It is based on home valuations conducted when John Major was still in power! It rises above inflation and hits those on fixed incomes from benefits and pensions the hardest. The Liberal Democrats are the only party that believes it should be scrapped.

Crucially we are the only party finding more money at this election to tackle deprivation at its source: educational underachievement. We will find an extra £2.5billion to spend in schools, targeted specifically at children on free school meals. The authors of this report make out that £2.5billion is a paltry amount that will make little difference. You try telling that to the teachers struggling with overcrowded classrooms or the parents desperate to get their kids the extra one-to-one tuition they need.

An average primary school could cut classes from 28 to 20. An average secondary school could run catch-up classes for 160 pupils, making sure no child gets left behind. That is a progressive policy that will do more to tackle poverty in the long term than any number of bureaucratic handouts from Labour.

Everyday I hear from constituents in the Highlands distraught and disbelieving at the tax system they face. Bankers and Conservative Party deputy chairmen get away with dodging their taxes while the poorest pay the highest percentage of their income in tax. We want to see a tax system that is fairer and simpler.

I am not going to apologise for being the only party proposing to provide an extra £1bn for those at the very bottom. I am not going to apologise for thinking it’s important for families on low and middle incomes, as well as the most deprived, to be able to make ends meet and put a little aside for the future. Our tax plans would be the most radical tax reform in a generation, and it is only cowardice from Labour that prevents them following us down this progressive and radical road to a fairer tax system.

20 Responses to “Lib Dems: Our tax plans are fair and progressive”