The Americans have voiced fears over the prospect of a Tory government, warning that a "self-absorbed" govt. would be "a more tentative and less reliable" ally. 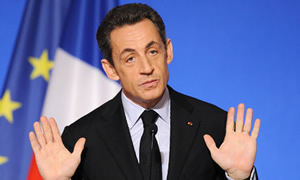 William Hague, in an interview in today’s Financial Times, tries to build bridges with Europe, insisting a Tory government wouldn’t “pick a fight” with Europe if it won the election, and would be “highly active and activist in European affairs from day one”. With Britain’s fiscal crisis “a priority”, says Hague, “we have enough on our hands without an instant confrontation with the EU”.

His “EU olive branch”, as the FT puts it, comes as The Guardian reports Nicolas Sarkozy’s warning to the Conservatives over defence co-operation in Europe. The French president’s ire follows news the Tories plan to pull out of the European Defence Agency if elected.

M Sarkozy, who is due to meet David Cameron on Friday, will tell him that the Tories’ stance “risks forfeiting vital French co-operation on energy, defence and the economy” if a future Conservative government refuses to engage over the future of Europe.

The Americans have also voiced fears over the prospect of a hostile, Eurosceptic Tory government, with the National Journal reporting concern in Washington that a “self-absorbed” Tory government would be “a more tentative and less reliable” ally.

Robin Niblett, director of Chatham House, told the Journal an anti-European British government would be viewed as a “liability” by the administration:

“For Britain to take an obstructionist approach within the E.U. will be seen more as a liability than as a badge of honor in Washington…

“You should not underestimate the visceral anti-European sentiment of his party … If Cameron doesn’t have a decent majority, it will create space for euro-skeptics [sic] to make trouble.”

Katinka Barysch, deputy director of the Centre for European Reform, added that Britain had been “spoiling for a fight” with Europe, a fight the Tories, in spite of the shadow foreign secretary’s apparent calm, may well engage in:

“The risk here is that the Conservatives will underestimate the reaction from the Continent … They will burn political bridges. Then there will be consequences on things that really matter, because they will have no goodwill.“

The biggest warning from the Journal, however, comes from Helen Wallace, a leading expert on the European Union, who believes Tory Europhobia could imperil the special relationship; if so:

“The U.S. will need another interlocutor in Brussels.”

“The Tories are still the same old euro-phobic dogma-driven obsessives that they always have been: Cameron is not in charge of his own destiny in relation to Europe but in hock to his back-benchers; Cameron has hand-picked for himself a set of extremely unsavoury allies in Europe; Cameron’s proposals on Europe are naïf, unworkable, undesirable and unachievable; and the Tory position is already damaging the national British interest.“