George Osborne says he will set out more details of the Tory economic policy in the coming weeks. There are some key questions he needs to answer. 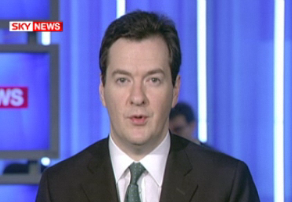 In his media round this morning after yesterday’s disappearance, George Osborne outlined that the Conservative party would set out more details on their economic policy in the coming weeks. With speculation already rife, there are some key questions he needs to answer.

First, Conservative Home reads the tea leaves this morning and speculates that Osborne will “cancel Labour’s NI increase as part of pre-election promises”. The National Insurance Contribution increase will kick in in 2011-12 and equates to a 1 per cent increase for employers, employees and the self-employed. According to Tables A2 and A11 of the Budget, the total rise will come to £9.0 billion in 2011-12 and £9.4 billion in 2012-13.

Will George Osborne cut Labour’s NICs rise? If so, will he pay for it with additional spending cuts or alternative tax rises, perhaps a further rise in VAT?

Tax allowances are traditionally linked to RPI (inflation) in the September before. In Sep 2009, RPI was negative (-1.4%) so there was nothing unusual about freezing thresholds for the coming year … inflation may now be rising by 3.7% but wages are only rising by 0.9%, according to the last figures..

But if the Tories had, as the claims infer, raised the tax thresholds by 3.7% now, it would have effectively have been a tax giveaway, with more money in our pockets – and bill to the public sector of £2.2bn.

Will George Osborne raise the income tax threshold by 3.7 per cent? If so, how will he pay for it?

Third, George Osborne reiterated again on the Today programme that a Conservative government would begin cutting in 2010-11 and would eliminate the “bulk of the structural deficit over the lifetime of the Parliament”. But he could not say how much further he would beyond the Government’s plans to bring the cyclically-adjusted deficit down from 4.8 per cent this year to 1.3 per cent in 2014-15. Ken Clarke gave more detail last week when he agreed with the European Commission that the Treaty Deficit, a separate measure, should fall to 3 per cent by 2014-15 (it is projected to hit 4.2 per cent).

Analysis by Left Foot Forward yesterday showed that achieving Clarke’s goal would require a fiscal consolidation of £78 billion by 2013-14, compared to Labour’s plans to remove £57 billion. Given Osborne’s indications that spending cuts would make up 80 per cent of the consolidation, there would be £62 billion of spending cuts compared to £38 billion under Labour.

Does George Osborne share Ken Clarke’s view that the Treaty deficit should come down to 3 per cent by 2014-15? If so, what else will be cut to make up for it?

Fraser Nelson has written a thoughtful piece on “Osborne’s weak response” for the Coffee House blog.

33 Responses to “After the Budget, the questions for George Osborne”