Use a brand that taps into a meme; look for the movements already working on this; keep your messaging as simple as possible; and give people easy things to do. 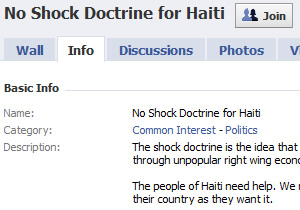 A couple days after the earthquake hit Haiti, I set up a Facebook Group, No Shock Doctrine for Haiti, which I wrote about on Left Foot Forward a few weeks ago.

It has also gained some media attention in various countries – mostly giving the group some credit for the International Monetary Fund (IMF) saying it would consider temporarily slowing it’s process of screwing the people of Haiti.

Most of this attention is probably undeserved, or uses the group as a social networking hook for a broader story.

But whatever is the case, here are my 5 lessons on Facebook group activism:

There are lots of ways to describe the idea I was trying to get across – disaster capitalism, plunder, exploitation. The group was partly successful (in growing, at least) because it was piggy-backing on Naomi Klein’s book of the same name.

When I first invited my friends, the ones who went on to invite theirs were those who had read the book. This generated a rapid pool of strong advocates, which is more important than a broader pool of weak advocates.

Essentially, rather than going for a less jargony title – “don’t let big corporations plunder Haiti”, “don’t use Haiti’s earthquake to impose unfair trade rules”, or something – the group put together an idea that had become a meme among a particular group of people: the Shock Doctrine, with a disastrous current event.

2)    Look for the movements already working on this

When something happens that you want to campaign on, the chances are that there are already people working on this.

A big Facebook group is good for a campaign, but it is the networks that were there before you turned up that will still be there when people stop posting on your wall. Get in touch with people from those long-term movements, and see what you can do to help them.

There have been numerous Haiti campaigns or actions alongside the Facebook group – in the States, Credo, Jubilee USA, England’s Jubilee Debt Campaign and Jubilee Scotland launched petitions on grants v loans, on conditions on aid, and against a shock doctrine for Haiti.

Lots of people have been demanding reparations for Haiti. In York, a group of students from People & Planet got together with their local community and organised a demonstration against disaster capitalism in Haiti.

The Radical Activist Network organised an excellent public meeting in London last week. These things have been the backbone of political movements for generations for good reasons.

Social networking gives the means of campaign communication to anyone. But if a political movement is to avoid fragmentation, it must come together.

There is a real risk that my generation (I am 24 years old) does not join democratic movements like the World Development Movement, People & Planet, and progressive political parties which work on these issues, and instead get involved in a series of fleeting Facebook fancies.

A Facebook group will succeed if it is supporting these activities, groups, and movements, rather than diverting attention away from them.

3)    Facebook groups are great for educating and sharing information, but rubbish for agreeing to do things

One of the things that was most pleasing was when people who aren’t very politically active got in touch. Lots of people said that they had never thought about things in this way, were horrified, and were glad to show their support for the group’s aims.

For these people, the group helped them to see the economic policies underlying so many of the world’s problems.

Another one of the main functions the group had was that people posted news stories from around the world, and from the more critical press, about what was happening in Haiti with regards to the issues we were concerned about.

There are also countless discussion threads in the group, about various issues.

Facebook is an excellent way to educate people, and to provide a space for people to get together and discuss things with people at the other side of the world.

You can give people simple things to do (see below), but unless actions have been agreed to by a group, rather than just imposed on them, it is very hard to get a decent number to do things that are much more labour-intensive than signing a petition or, maybe, going to a demo for a day.

Facebook does not provide the functionality to have proper meetings among more passionate members, and, say orgaise simultaneous demos or stunts – especially given that you can’t message a group over 5000 members.

If I were doing this again, I would have set up a fan page, so that I could get status updates onto people’s news feeds; not ideal, but better than a group, which has no way of contacting people once it passes 5000 members.

Then, after the first few days, I would have organised a mass conference-call/skype meeting to agree what we would all do – ideally with input from/led by the organisations who have been campaigning on this stuff for years.

4) Keep your messaging as simple as possible

If the main thing the group can do is educate people, then make sure you keep the basic description relatively simple and understandable, and provide links to where people can find out more.

Your key activist members will know what you mean anyway.

OK, I know this is a fairly simple standard lesson of campaign communication, but it’s always worth remembering…

5) Give people easy things to do

Including “invite your friends to this group”.

Our guest writer is Adam Ramsay, who set up the “No shock doctrine for Haiti” Facebook group and writes for Bright Green Scotland