A cross-party group came within eight votes of passing a new green standard for power plants last night. Poor Lib Dem turnout has been blamed for the failure. 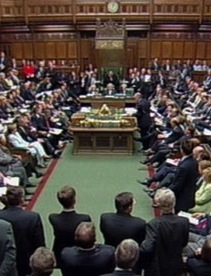 A cross-party group came within eight votes of passing a new green standard for power plants last night. Poor Lib Dem turnout has been blamed for stopping the measure passing.

In a sizeable rebellion, 27 Labour MPs last night voted against the government, and in favour of introducing a new green standard for power stations that would outlaw the building of the most polluting power stations like Kingsnorth.

The amendment to introduce an emissions performance standards (EPS) for power plants was narrowly defeated by just eight votes. Thirteen Lib Dem MPs, including Nick Clegg, Vince Cable and Chris Huhne did not bother to turn up. Had they done so, and voted for the measure they themselves have championed, the government would have been defeated and Parliament would have ended the era of dirty coal.

David Cameron who has been a prominent supporter of the EPS led many of his Conservative MPs through the chamber to support the new green standard – but thirty nine of his MPs did not vote either.

Among the Labour backbenchers who supported the new green measure were Alan Simpson, Jon Cruddas, and Colin Burgon, who was a prominent figure in the Leeds miner’s strike in the 1980s. A few Labour MPs including Dianne Abbott, Fabian Hamilton and Austin Mitchell told climate campaigners they’d vote for the amendment but then either voted against it or abstained. Reacting to the vote, the Executive Director of Greenpeace UK, John Sauven, told Left Foot Forward:

“Yesterday’s vote shows the depth of unease within the Labour party about a bill that hands billions of pounds to energy companies but fails to hold them to account. Ministers caved into lobbyists from big German utilities who claimed that this measure would scare off investment, when the evidence from places like California shows that the opposite is true. Investors want certainty. Without an emissions performance standard new power stations are subject not to a legally binding limit, but to a gentleman’s agreement that leaves an uncertain future for both investors and the UK’s climate targets.”

27 Responses to “Government shaken by rebellion on Energy Bill”