Gordon Brown's commitment to the construction of new aircraft carriers is good news for defence sector jobs. But it is bad news for the defence budget and strategy. 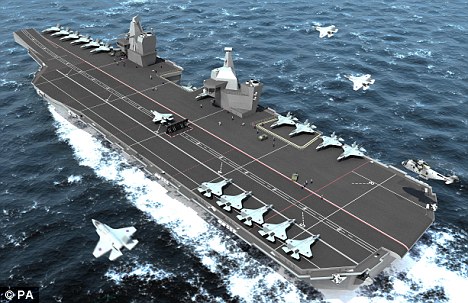 The Government is now in danger of eschewing the warnings of its own senior budgetary and strategic advisors. Defence economist Malcolm Chalmers’ recent RUSI report has warned of the grave dangers that await front line troops in terms of cuts if the government refused to take tough choices on big ticket items like the aircraft carriers or the joint strike fighter project. Similarly, the new Chief of the General Staff, General Sir David Richards, has likewise urged the government to make long-term choices between major procurement projects and front line resourcing.

The potential for a strategic redefining of Britain’s interests and consequent resource allocation was outlined in the recent ippr report ‘Opportunities in an age of austerity‘, in which former Defence Chief Lord Guthrie and noted security expert Andy Hull argued that:

“In concrete terms this will have to mean, above all, not developing new weapons to fight old wars. The new 65,000 tonne aircraft carriers, the planes to fly off them and the destroyers to protect them must be firmly in the frame for cuts. The super-carriers are currently costing £5bn (already more than £1bn more than originally predicted).”

This approach meets with favour even from military historian Max Hasting who recently observed:

“Opponents of draconian cuts in navy and RAF strengths cite the importance of a balanced strategy, which addresses potential future threats as well as current commitments, dominated by Afghanistan. The problem with this approach, admirably sensible in theory, is that it threatens to leave Britain’s forces balanced only in inadequacy.”

With the Conservative Party in disarray over its own cuts programme now is not the time for the Labour Government to prioritise defence contractor-pleasing procurement projects over a genuine strategic opportunity to set British defence on a firm and lasting footing.

8 Responses to “Brown’s super-carriers are the wrong choice”