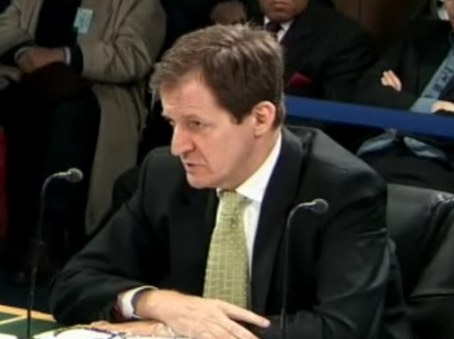 Alastair Campbell’s appearance at the Chilcot inquiry is the main story for most papers. He stood by the September 2002 dossier which contained the controversial “45-minute claim” and gave details of Tony Blair’s pre-war guarantee to President George Bush. The Guardian suggests that the appearance “seemed to have steeled the much-derided committee to raise its game” while the Independent believes it has prepared the ground for Tony Blair and sets out a series of questions for the former PM. The Mail has the harshest words of all: “Unrepentant and STILL lying: Alastair Campbell ‘stands by every word’ of dodgy dossier that took us to war with Iraq.” Meanwhile the Guardian and Times cover news that an official Dutch inquiry concluded that “the military action had no sound mandate in international law … Despite the existence of certain ambiguities, the wording of Resolution 1441 cannot reasonably be interpreted as authorising individual member states to use military force to compel Iraq to comply with the Security Council’s resolutions without authorisation from the Security Council.”

The Independent and Telegraph cover an interview of Nick Clegg by Attitude magazine where the Lib Dem leader attacked David Cameron as someone who is “very difficult to trust” on the issue of gay rights. Clegg set out a series of new manifesto commitments including forcing faith schools to tackle homophobia, allowing civil partnerships to be called “marriage”, and reversing the ban on gay men being allowed to give blood. Clegg complimented Labour for its track record on gay rights. Ben Summerskill, chief executive of the gay rights group Stonewall, welcomed Mr Clegg’s comments but added that he believed Mr Cameron had genuinely changed his views on gay rights.

Ministers have been told to be bold in submitting ideas to Labour’s manifesto author, Ed Miliband, the Climate Change Secretary. A senior source told the Times, “This time we are the clear underdogs and it was agreed that we should have the most radical manifesto yet put to the electorate.” The FT reveals that the Labour campaign will be founded on a belief that better economic news will be arriving ahead of polling day, including possible signs that unemployment is peaking at about 2.5m, well short of the 3m many expected. Data for the fourth quarter of 2009 are expected to show that Britain has finally entered its recovery phase. In an interview with the Times, David Miliband dismissed suggestions that he is too cerebral to prosper in the Labour party, declaring, “I’m not going to plead not guilty to the charge of thinking.”

Reaction to Alan Johnson’s decision to ban Islam4UK – the Islamist group that provoked public outrage by planning a march through Wootton Bassett – is mixed. Inayat Bunglawala, from the Muslim Council of Britain, said that while the “overwhelming majority” of British Muslims strongly disapproved of Islam4UK’s actions, he felt uncomfortable about the Government’s decision to outlaw the group. Shami Chakrabarti of the human rights group Liberty told the BBC that proscription should be limited to groups involved in terrorist activity. Johnson said, “Proscription is a tough but necessary power to tackle terrorism and is not a course we take lightly.”

Seven judges at the European court of human rights said that random stop and search powers under section 44 of the ­Terrorism Act were far too widely drawn and lacked adequate parliamentary and legal safeguards against abuse. The Guardian outlines that more than 117,000 searches took place in 2008 with black and Asian people at least four times more likely to be stopped. The independent reviewer of anti-terrorism legislation, Lord Carlile of Berriew, QC, said that the judgment could have serious implications and might require parts of the Terrorism Act 2000 to be rewritten.