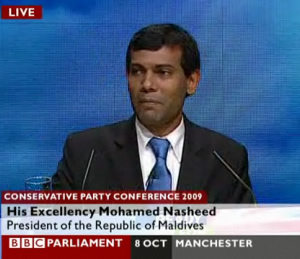 The Conservatives today welcomed Mohamed Nasheed, President of the Maldives and a world-leader in tackling climate change – but some of their other allies, the far-Right climate change-denying Czechs and Poles they sit alongside in the European Parliament – were notorious by their absence.

Quite what Mr Nasheed, the Maldives’ first democratically-elected President, would make of David Cameron’s friend Jaroslaw Kaczynski – who described global warming as “a lie” – or Czech leader Václav Klaus, who called climate change “a myth”, nobody knows. Has he even been made aware of the views of his hosts’ new best friends?

“If we do not act now, my grandchildren will find their island home will have disappeared. The success or failure of Copenhagen really is a matter of life or death.

“When the price of failure is the loss of a nation, this is the strongest incentive to succeed.”

Though neither Mr Kaczynski nor Mr Klaus were in Manchester, contorversial Polish extremist Michal Kaminski and Roberts Zile, whose Latvian For Fatherland and Freedom party throw street parties to celebrate the Waffen SS, were feted by senior Tories at a fringe meeting.

Yesterday Left Foot Forward revealed the anti-gay record of Conservative MEP Charles Tannock, who falsely told Channel Four News on Tuesday that he had “done a lot of things to help” the gay community.