'The cup has run over and the company need to show more respect for their workers.' London bus drivers on day 20 of strike action. 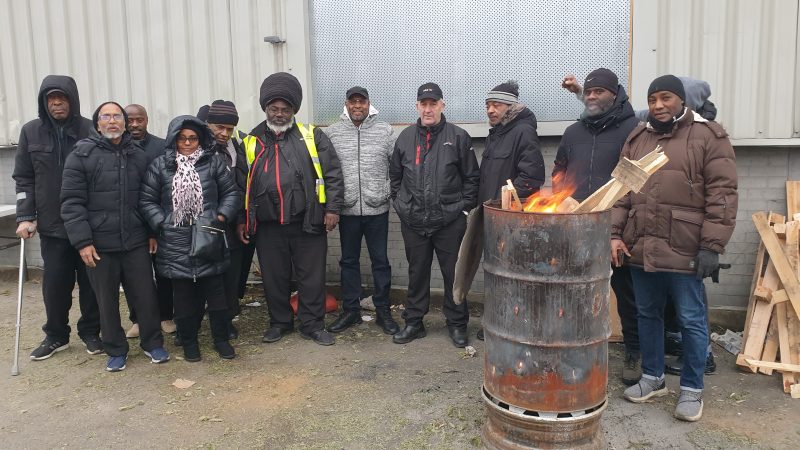 There was both fatigue and hope on the picket lines this morning, as bus drivers turned out for day twenty in an ongoing dispute against poverty pay and crushing work schedules.

Bus drivers working for the company Abellio in South and West London started their wave of strike action on 22 November.

Initially 950 drivers were involved in the dispute, however increased frustration amongst the workforce saw union membership double, showing their employers that this is a battle they are willing to fight to the end.

Bus drivers told LFF how staff were being forced to work overtime to pay their bills whilst still having to use foodbanks, and how work schedules and conditions are leaving drivers exhausted.

Unite the Union will be representing their members as they enter into fresh pay talks today with Abellio, hoping to reach an offer to put to members.

One bus driver on the picket line at Battersea said what they are asking for is not just about pay and a decent work life balance, but respect from their employers.

Known by his colleagues as Banjo, he has worked for Abellio since 2009 and is now the Branch Secretary.

“Many people have worked here longer than me and this has been a long time coming, the cup has run over and the company need to show more respect for their workers.”

The tipping point for him and many other colleagues was being offered a 1p hourly pay rise for their overtime rate.

This left employers feeling insulted and upset, especially against the current cost-of living crisis, and with Abellio raking in £354 million in profit in 2021.

Banjo said: “It’s an insult. In this financial climate, what can 1p do?

“After I’ve given my all to this company, it was one of the worse things they’ve done to me, I value myself as an established worker and I can’t understand who thought 1p would give us value.

“It demoralises you and doesn’t make you want to get up in the morning. I’m happy to work for this company and help it grow but I’m just not happy with how their dealing with our wages.”

He added: “If they expect 110 per cent, which is what we are giving, then make it worth our while. All we are asking is for them to look after us in the same respect.”

Banjo emphasised he felt the firm itself was a nice place to work and, like many of his colleagues who have worked there for decades, he doesn’t want to leave his job.

But when drivers are working overtime to pay their bills and are still forced to go to foodbanks, something had to change.

“The people who sit at the top of the table and eat well, they never know what’s happening on the bottom end of the table,” said Banjo.

Junisa Kpekawa, Bus Driver and Branch Chairman of Battersea bus station, said his garage would be lucky to get 25% of buses out today, showing the scale of worker support for strike action.

Conditions are a major element of the dispute, as drivers struggle with unsociable work hours and unstable shift patterns.

Kpekawa, who has been in the bus industry since 2006, emphasised the health and safety implications of the current conditions.

“It’s the schedules that are killing people. Doing 12 hour duties and getting a 40-minute break, it’s pushing drivers to the limit.

“Some people are starting at 12, finishing at 9pm and are expected back in at 7am the next morning. It’s not right.

“What we are asking for is the same duties Monday to Friday, we want a bit more stability in our working life pattern.”

Previous offers put to members were rejected as ‘unacceptable’, with one major reason that it would leave full-time drivers with under two years’ of service on £3.29 less per hour than their colleagues with more than two years.

Unite’s National Lead Officer, Onay Kasab, spoke to LFF outside the Abellio offices before going to meet the management.

He was hopeful today that an improved offer could be put on the table for members, to settle the dispute.

Abellio recently raised senior drivers’ pay from £15 to £18 an hour, which Kasab sees as a win already, however emphasised that, in the bus industry, that pay can be eroded away unless there is a good scheduling agreement.

Without better timetabling workers would not see the full worth of the pay increase.

“We need to solidify that win so that when it’s implemented they get the full value,” emphasised Kasab. “We are looking for an offer, there’s got to be movement from the employer.”

He added: “We are getting to that crunch stage in the dispute, our members are really brave and are making a huge sacrifice but ultimately people don’t want to be out on strike but in work doing their job. But equally if they have to, they are very clear, they will stay out here for as long as it takes.”

If the dispute is not resolved drivers will be out again tomorrow, with more strikes set to be scheduled.