“So first, why doesn’t [Rees-Mogg] admit the truth, that anyone who knows anything about this subject says his claim that fracking will cut bills is nonsense." 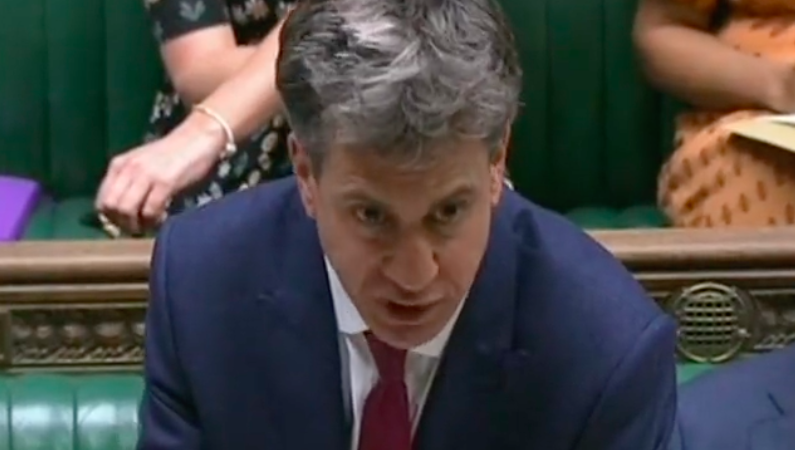 Ed Miliband has been praised for the manner in which he took apart Jacob Rees-Mogg’s reasoning to lift the ban on fracking, making the newly appointed Secretary of State for Business, Energy and Industrial Strategy look utterly clueless.

The government announced today that fracking could go ahead after a moratorium was put in place in 2019 , following concerns over earth tremors.

Rees-Mogg said in his statement that “tolerating a higher degree of risk and disturbance appears to us (the government) to be in the national interest given the circumstances.”

Fracking is a process to get at oil and gas contained within shale rock and is seen as a way of extracting even more fossil fuels, undermining our emission reduction targets and worsening the effects of climate change.

He said that the excuse for lifting the ban, namely that it will make a difference to energy prices was not true.

Ed Miliband rips into Jacob Rees-Mogg over the lifting of the fracking ban.

“We will hang this broken manifesto promise around the Tory Party’s neck…. between now & the next general election” pic.twitter.com/GNY2H3S1KE

“Gas is sold on the international market. The current chancellor said in February: “No amount of shale gas will be enough to lower the European price of gas.

“Even the founder of Cuadrilla said the secretary of state was wrong in an article published yesterday.

“So first, why doesn’t [Rees-Mogg] admit the truth, that anyone who knows anything about this subject says his claim that fracking will cut bills is nonsense.

“Next let’s come to safety. The 2019 manifesto on which he and every member of the party opposite stood said this: “We will not support fracking unless the science can show categorically that it can be done safely. They are lifting the ban but they can’t supply the evidence.”

He went on to describe the plan as a charter for earthquakes, adding: “I look forward to [Rees-Mogg] and his colleagues explaining his charter for earthquakes to the people of Lancashire, Yorkshire, the Midlands, Sussex, Dorset and indeed Somerset [that they] will be part of his dangerous experiment. Let me tell the party opposite, we will hang this broken promise around their necks in every part of the country between now and the next general election.”