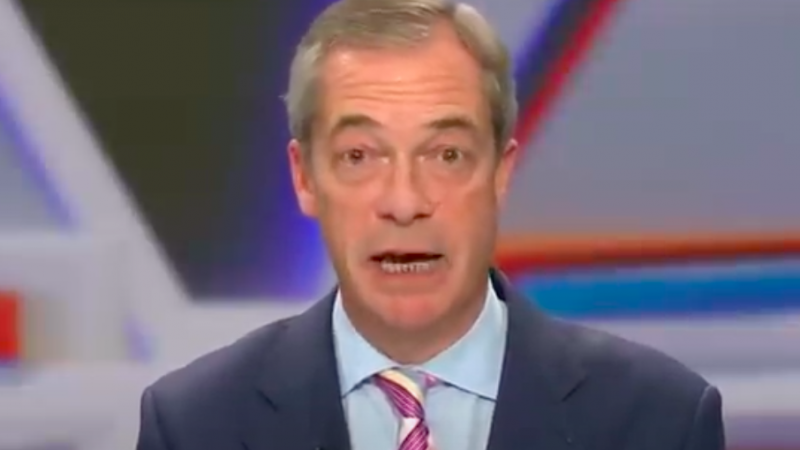 Nigel Farage is being humiliated for his latest take on Ukraine after Vladimir Putin’s decision to invade the country.

The GB News host said in his latest tweet: “Well, I was wrong. Putin has gone much further than I thought he would.

“A consequence of EU and NATO expansion, which came to a head in 2014. It made no sense to poke the Russian bear with a stick.

“These are dark days for Europe.”

Not only did Farage fail to condemn Putin for his decision to invade Ukraine, he also failed to show any support for the Ukrainian people.

Farage has spent quite a bit of time on GB News pushing Putin’s line. Last week he claimed that Putin’s demand that Ukraine does not join the western military alliance NATO should be met.

He said: “The prime minister said ‘we need to learn the lessons of 2014’. Well, what happened in 2014 in the Ukraine was a revolution, albeit a pretty peaceful one, an elected leader removed from office and then of course, the Crimea taken by Vladimir Putin’s forces.

“And yes Mr Johnson, we do need to learn the lessons of 2014, because it was the European Union wanting to expand, wanting the Ukraine to join it, that directly led to that revolution. People stood there in the squares of Kyiv waving European Union flags.

“I thought for 30 years that the NATO policy, the EU policy of expanding ever eastwards was a huge strategic error.”

Following his latest tweet Farage was ridiculed on social media. Anna Soubry commented: “No condemnation of Putin’s invasion of #Ukraine & no support for its people. #Farage is no democrat & previous followers are now seeing him for what he is really is – a Putin apologist.”

Tom Chivers tweeted: “Something I don’t say very often because I kind of assume all my followers already think it, but worth reiterating now: Nigel Farage is really, really bad. Just a bad person who is bad for the world. Either stupid or malign, and probably both.”