With calls for public ownership of public services, scrapping universal credit and a Green New Deal, the pair set out their stall of climate action combined with a left wing economic agenda. 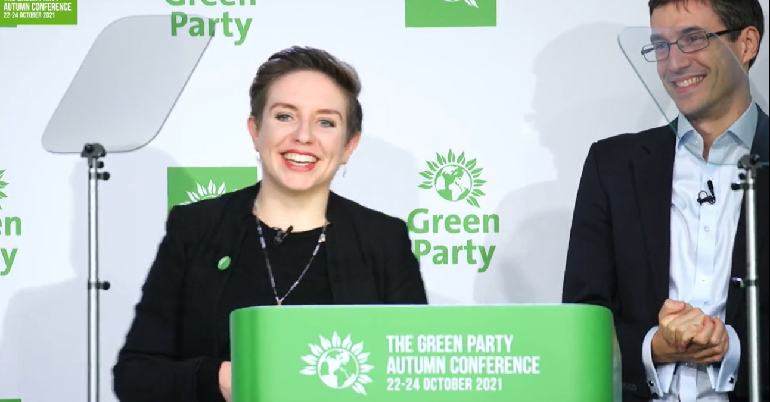 The Green Party of England and Wales is holding its autumn conference in Birmingham this weekend. The conference is the first major test for party co-leaders Carla Denyer and Adrian Ramsay, who have now given their first speech to the party faithful since they were elected earlier this month.

At first glance, they appear to have passed that test. The speech – a slightly awkward double act in which they shared one lectern between them – was warmly received by the two-thirds-full hall of party members who punctuated it with outbreaks of applause and cheers.

They kicked off by thanking former co-leaders Sian Berry and Jonathan Bartley for delivering “record election results” and continued by reiterating the key talking points of their election campaign. Following this, they went on to set out their pitch to members and the public. With calls for public ownership of public services, scrapping universal credit and a Green New Deal, the pair set out their stall – now familiar territory for the Greens – of climate action combined with a left wing economic agenda.

Denyer said, “People want a carbon tax on the most polluting industries. They want those who fly frequently to pay more for it. They want proper funding for greening our homes. And they want to ways to eat less meat and dairy day to day.

“Only the Green Party has the policies the public is looking for – not only on climate but also on creating a fairer society – like public ownership of public services, a pay rise for key workers, and a universal basic income to ensure no one is left behind.

“We do not accept that inequality is inevitable. We say that those with the most should pay the most. It’s time to straighten out the tax system once and for all. That means that the richest people, the Covid-billionaires and the biggest corporations pay their fair share, and that income from wealth is taxed properly.”

Ramsay followed this up with the only major policy announcement from the speech. Against the backdrop of the energy crisis, Ramsay called for the introduction of a £320 winter fuel payment to every household. The proposal would be paid for by a land-value land tax on private landlords.

He told the conference, “In the face of hikes to energy bills and rising fuel prices and to ease the burden on household budgets we are  calling on government to extend winter fuel payments with a one-off payment of £320 to every household to get us all through this winter.

“It’s a costed proposal to be funded from a one-off 1% land-value tax on residential landlord properties. This proposal is about keeping households from falling into fuel poverty, it’s about keeping people safe. It’s about the state responding to market failure. It’s about human dignity.”

He continued, “This measure is crucial but it’s not the long term solution. As a country we should have been investing to insulate every home and install renewable energy, to cut carbon emissions and cut energy bills. Our building standards should have been stringent, not penny pinching – set for the people who live in the homes, not the developers who build them for profit and walk away.”

Denyer also used her part of her speech to attack both the Tory government and the Labour Party. She accused the Tories of “playing divide and rule”, and Labour of failing the public. She said, “We are tired of a Tory government playing divide and rule, tired of out of touch policies that ride roughshod over people, tired of politics which amount to little more than an old boys club serving the interests of its pals.

“We’re sick and tired of this country’s leaders looking at Covid rates ticking up day after day, yet refusing to mandate masks – or even wear them themselves in Parliament. Leaders who urge people into workplaces they don’t need to be in, and leaders who fail to provide proper sick pay for people who need to isolate. This country is sick, and it is tired.

“We need better – we demand better. And we see none of it from an official opposition that fails the public, ignores the votes of its own members, and can’t take a stand on the biggest issues of the day.”

Denyer and Ramsay’s speech comes as the Greens are experiencing strong support in the opinion polls. The latest YouGov poll had the Greens on 10 per cent of the vote.

The Green Party Conference will be running until Sunday afternoon. Members will be debating and voting on a series of motions, including support for free social care for disabled people, and a £15 an hour minimum wage.

This article is jointly published with Bright Green.