MPs are being urged to reject plans to ramp up oil extraction near Shetland. 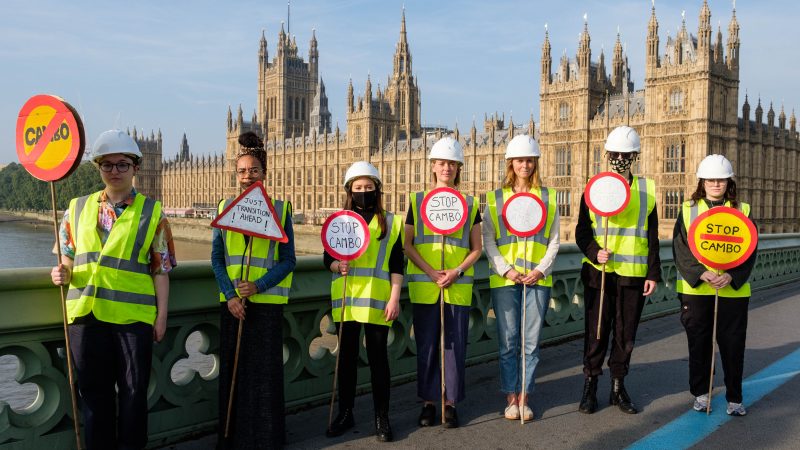 Lawmakers returning to Parliament today following the summer break were met by a group of climate change activists. The protestors were demanding MPs urge the Prime Minister to reject the proposed Cambo oil field development.

The activists are calling upon Tory MPs in particular to join growing opposition to the controversial Cambo oil field project.

The Cambo heavy crude field is situated off the coast of Shetland. It contains over 800 million barrels of oil. The first phase of the project aims to extract 150 – 170 million barrels, creating emissions equating to the amount emitted by 16 – 18 coal-fired power stations for a year.

70% of the project is owned by the private equity firm, Siccar Point Energy, and the rest by Shell.

If the project was approved and it was to begin operations in 2025, the Cambo extension would produce oil and gas until 2050. It would also undermine a court ruling which ordered Shell to cut emissions by 45% by 2030 compared to 2019 levels. The landmark case was brought by Friends of the Earth and more than 17,000 co-plaintiffs.

The International Energy Agency has warned that no new oil and gas field should be developed if we are to fight global warming.

Today’s protest outside parliament is the latest in a long line of action aimed at urging ministers to reject plans to ramp up oil extraction near Shetland.

Preparation work for the project was postponed last month after protests by environmental campaigners. On August 24, 2021, Greenpeace campaigners used kayaks to confront a ship in Norway, which was preparing construction equipment for the fossil fuel production project.

The UK government has come under fire from activists, politicians and researchers for refusing to rule out the approval of the new oil field ahead of the Cop26 climate conference, which is being held in Glasgow in November.

Today’s protest was organised by Fossil Free London, a collaboration of groups that campaign for social, economic and environmental justice, and a greener city beyond fossil fuels.

Robin Wells, an activist with Fossil Free London, told Left Foot Forward how the protest went and the wider aims of the group:

“It was a beautiful backdrop to our protest this morning. The clear blue sky as MPs returned from Parliamentary recess was a world away from the horrendous instability we’ve seen in our weather worldwide in recent days and months. We took our message to Parliament today to remind MPs of their responsibility to intercept the worst of climate loss and damage; that means no new fossil fuels.

“Together young people will combat some of the worst effects of climate breakdown, and at Fossil Free London we intend to keep protesting Cambo until we stop new oil in the UK for good,” said Wells.

More than half of MPs already contacted on the issue

According to Fossil Free London, more than half of Westminster MPs have been contacted by constituents calling on them to urge Boris Johnson to reject the plans for Cambo. The campaign to contact MPs follows a ‘Stop Cambo’ petition that was delivered to Downing Street in August and that garnered more than 80,000 signatures.

A ‘code red for humanity’

The same month, the International Panel on Climate Change (IPCC), published what was described as an “alarming” new report. In response to the report, which warned that global temperature rises are poised to reach or exceed 1.5C over the next two decades, Antonio Guterres, United Nations secretary general, said the IPCC paper signalled a “code red for humanity” and “must sound a death knell” for fossil fuels.

In May this year, the International Energy Agency (IEA) said there should be no new oil, gas or coal development is the world is to reach net zero by 2050.

Fatih Birol, the IEA’s executive director and one of the world’s foremost energy economists, told the Guardian: “If governments are serious about the climate crisis, there can be no new investments in oil, gas and coal, from now – from this year.”

Asserting that Johnson doesn’t seem to have heard Antonio Guterres’s warnings that the IPCC report ‘must sound a death knell for coal and fossil fuels, before they destroy our planet, or the IEA when it called for no new investment in oil and gas if we’re to hit safe climate targets, Robin Wells reiterated the importance for MPs to urge the PM to put an end to fossil fuel investment.

“We know he listens to his backbench MPs and so we are asking them to convey the message that there can be no new North Sea oil and gas developments if we are to maintain a liveable climate, starting with Cambo,” Robin Wells commented.

Despite multiple warnings from leading energy groups and figures from around the world, campaigners are having to call on MPs to urge the UK prime minister to put an end to fossil fuel investment.

As climate activist, Joanna Warrington, comments: “MPs need to tell Boris to put an end to fossil fuel investment in the North Sea and seriously invest in clean energy and jobs. We should be spending money on supporting workers and building a green economy, not on new fossil fuels.”