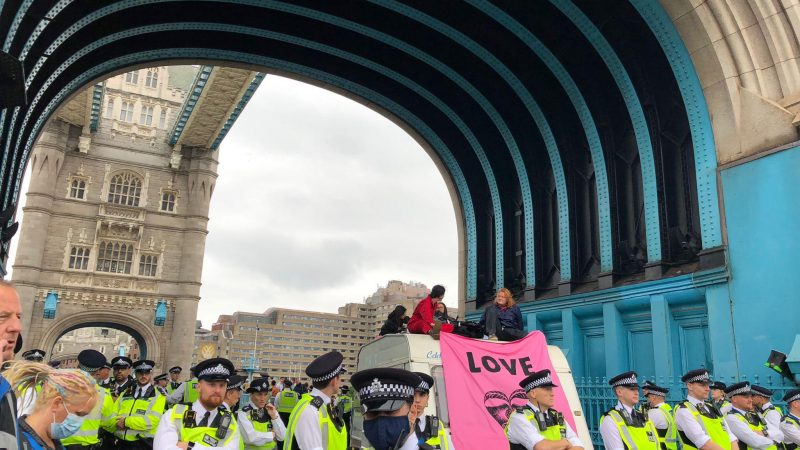 Climate activists clashed with the Met Police over the weekend, amid reports of more than 350 arrests since Extinction Rebellion (XR) began its ‘Impossible Rebellion’ just over a week ago.

On Monday the Met shared an Extinction Rebellion video of police officers rushing in to prevent Kensington’s Cromwell Road from being blocked by activists attached to a giant bamboo structure. The force wrote: “We predicted where activists might strike, taking immediate action.”

XR made headlines by blocking London’s iconic Tower Bridge on Monday, to draw attention to the need for rapid climate action ahead of this autumn’s COPP climate conference in Glasgow. The bridge was reopened by police after nearly six hours.

At the time of writing, XR protesters was attempting to block London Bridge, with the Met Police ‘assessing the situation’ and likely to step in.

Organisers allege that some of those arrested over the past week have been denied access to appropriate solicitors and have been given ‘harsh bail conditions’ barring them from the capital.

In a statement to supporters, XR’s legal defence team made a series of damaging allegations against London’s police force, writing:

“As we enter week two of the Impossible Rebellion the police continue to act as private security for the government, protecting the interests of wealthy industry over the safety of its citizens. The Met have done their best to shut down each and every demonstration during the Impossible Rebellion, sometimes before rebels have had any opportunity to exercise their human right to protest.

“In the past week we’ve seen all sorts of questionable police behaviour, including multiple raids, suspect stop and searches and use of disproportionate force, such as charging at peaceful protesters and tackling them to the ground.

“And this troubling behaviour isn’t limited to the streets. Many in custody have been denied access to a protest experienced solicitor, and upon release have been handed harsh police bail conditions, restricting them from entering parts of London. Both of which have the potential to be an interference with rebels’ human rights, and must be challenged.

“In addition, sources have raised concern over the possibility that the Met are using facial recognition at the Impossible Rebellion. The Met have denied this; however, a van kitted out with cameras that had been previously used for this purpose was spotted near protest sites. This technology has previously been found to breach rights, with Liberty describing it as “an inherently oppressive and discriminatory surveillance tool…[which] threatens our privacy rights and freedom of expression, and increases police discrimination against people of colour””.

The ‘Impossible Rebellion’ demonstrations began last Monday when protesters blocked roads in the capital, including around Trafalgar Square, as they demanded the government end investment in fossil fuels that are driving climate change, the i newspaper reported.

A statement from XR ahead of the protests announced their new demand: “Stop all new fossil fuel investment now.”

A spokesperson said: “It’s not a radical ask, in fact it’s the least the government could do to show they are serious about tackling the climate and ecological crisis ahead of hosting the COP26 UN Climate Talks in November.

“And it’s not just Extinction Rebellion saying we have to stop pouring petrol on the fire. The International Energy Agency said in May this year that there must be no new oil, gas or coal development if the world is to reach net zero by 2050, and over 100 Nobel Laureates, including the Dalai Lama, have signed the Fossil Fuel Non-proliferation Treaty.  Before we begin to repair the damage, we need to stop making the crisis worse.”

The Met police have spent £50m policing XR protests since 2019, according to a recent LBC report.