"When it comes to tackling the climate emergency, the UK Government is very good at talking up their climate credentials, but completely fails to follow through with the urgent steps needed.” 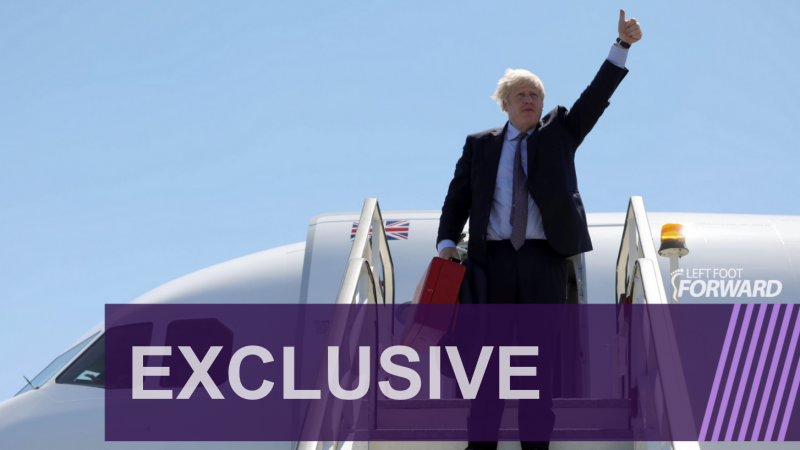 A majority of voters think Boris Johnson’s decision to get a jet to fly to the G7 meeting in Cornwall was wrong, exclusive new Savanta ComRes polling for LFF has revealed.

Climate change was high up the agenda for the G7 meeting of Western leaders at the weekend – leading to widespread anger over the Prime Minister dodging greener forms of transport.

Boris Johnson’s trip was just 250 miles (400km) to Cornwall from London. Over 700,000 train journeys in and out of Cornwall are made each year.

The PM even boasted of tackling climate change while standing in front of his jet, writing on Twitter: “I’ve arrived in Cornwall for this year’s G7 where I’ll be asking my fellow leaders to rise to the challenge of beating the pandemic and building back better, fairer and greener.”

The PM hit back: “If you attack my arrival by plane, I respectfully point out that the UK is actually in the lead in developing sustainable aviation fuel.”

However, the BBC calculated that – on a commercial jet, not his far-more polluting private jet – the London-Cornwall flight would contribute around 100kg of CO2 to the climate, compared to just 14kg on the train. Jet zero is currently a pipe dream.

Now new polling for Left Foot Forward has revealed that 54% of voters think the PM’s decision to fly to Cornwall for the G7 was the ‘wrong’ decision, to just 30% who thought it was the ‘right’ move. Opposition to the flight was highest among older voters, with 64% of 55-64 year olds branding it the wrong decision, to just 45% of 18-24 year olds.

A plurality – 49% of voters in the South West and 45% of those in London – thought the PM was wrong to fly, rising to a whopping 69% in Scotland – which bodes badly for the PM’s travel to this November’s global COP climate change summit in Glasgow.

Conservative voters were split, with 42% opposing the PM’s jet trip, to 40% who supported it. But 53% of Leave voters thought it was the wrong decision.

Chris Hopkins, Associate Director of Savanta ComRes said: “It does seem fairly hypocritical of Boris Johnson to fly to Cornwall to host the G7 where climate change will be high on the agenda, and the fact that a majority think it was the wrong decision from him says a lot It is interesting.

“However, that younger adults were more likely to think that his decision was right than older adults, indicating that climate issues are not exclusively stoking the fire of younger generations.”

Josiah Mortimer, co-editor of Left Foot Forward, who is from Cornwall, said: “Voters don’t seem to buy the PM’s spin that making unnecessary internal flights in a jet can somehow be green.

“This was a trip that thousands of people make every year on train – rather than take the plane. It sends a pretty strange signal to voters at a time when the UK is supposed to be leading the world in the fight against climate change.”

Labour’s Olivia Blake MP, the party’s shadow nature minister, told LFF: “By choosing to fly to Cornwall for the G7 summit this weekend – instead of taking the perfectly good train – the Prime Minister has sent a clear message to the public and world leaders. When it comes to tackling the climate emergency, the UK Government is very good at talking up their climate credentials, but completely fails to follow through with the urgent steps needed.”

She added: “It was the same story all weekend – government rhetoric continuously overstating the reality, with new commitments lacking concrete substance, and in the case of their “Blue Planet Fund”, any new funding announcements. The government is making a mockery of our role as hosts and it is no wonder the public disapprove.”

The Greens also welcomed the findings. Green Party of England and Wales deputy leader Amelia Womack said: “In France, they’re bringing in bans on short domestic flights to encourage rail travel. Our Prime Minister takes a private plane to the coast of his own country.

“This poll shows that the public sees the terrible irony of waving from the steps of a private plane while promising to build back greener, and it’s just not good enough.

“If he can’t afford the UK’s eye watering train fares, he should look at making low carbon journeys the cheapest and most affordable options ahead of COP26 later this year, and show the world some decisive climate action.”

Johnson’s round trip on the Airbus A321-253NX also included a test flight, according to local plane-spotters, while the G7 leaders were met with a fly-over from the Red Arrows.

The G7 conference saw widespread protests from Extinction Rebellion and other green groups keen to highlight the UK’s role in contributing to climate change.

A recent analysis by Green Alliance found government policies announced so far would deliver just 26 per cent of the necessary cuts to achieve the target of a 68 per cent reduction in CO2 emissions by 2030.

A spokesperson for Extinction Rebellion told LFF: “If anyone still needed persuading that our government has not yet accepted the full scale of the climate and ecological crisis this is it. In November this year, the UK will host the UN climate talks in Glasgow. If we are to have any hope of finding a road out of this mess the government needs to know that the people are watching them, that’s why Extinction Rebellion will be back on the streets of London this August to demand an end to the denial and the delay.”

The question read: “Leaders from the G7 countries are currently meeting in Cornwall to discuss global issues, including climate change. The UK Prime Minister used a private jet to get to Cornwall from London. Do you think this was the right decision, or the wrong decision?”