As Londoners head to the polling station to elect the capital’s next mayor, Left Foot Forward’s Josiah Mortimer caught up with Green Party candidate for mayor of London, Siân Berry. 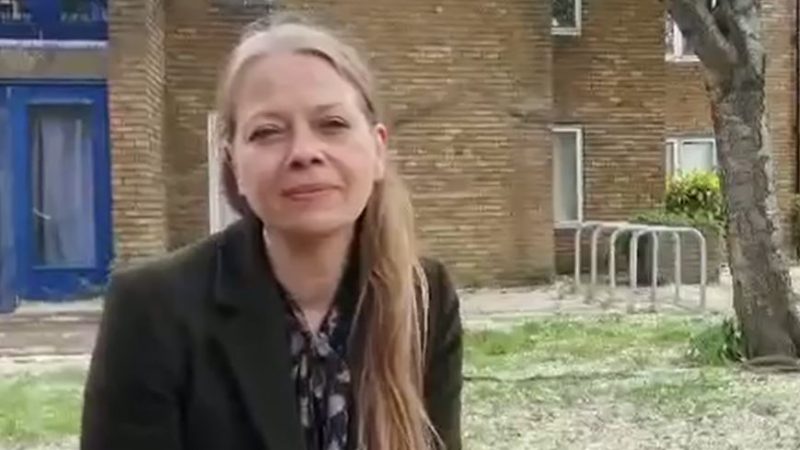 Left Foot Forward spoke to Siân Berry at Denby Court – a council and housing association estate which is being demolished by Lambeth’s Labour council.

Residents are facing eviction, and the Greens are keen to spotlight their proposals to boost social housing and amplify tenants’ voices. It’s a frantic last day of campaigning, with Berry noting how some voters were still making up their minds on the day itself.

“I want to say you can do something amazing with your votes, you can vote for me for first preference for mayor.

“You can do something absolutely brilliant and really stand up for high wages, lower rents, fighting for really transformative policies, like a basic income, and the right targets to solve our climate emergency,” she said.

Josiah Mortimer:  Would you say Sadiq Khan has been a ‘let-down’ for London over these past few years? Are you seeing people switch from the Labour Party to the Greens?

Siân Berry: A lot of people expected more of the current mayor. I’ve certainly spent the last five years trying to make his policies better, pushing some of the manifesto policies from my last campaign though in City Hall. Things like funding youth services, changes to the rules on how estates are demolished to give residents a voice. We haven’t seen very much action from him on some of the issues that mean a lot to Londoners.

“On clean air, he’s proposing an ultra-low emission zone, a clean air zone that only goes part way across London. All Londoners need protection with clean air, that’s what you’d get with a real Green plan. I think people are switching from Labour to the Greens, but also from other parties as well, because we are putting forward the most positive vision in this election.

We are genuinely about transforming London, working with Londoners to do it, and people are up for that.

Josiah Mortimer: You’ve had a bit of a poll bounce in the latest YouGov poll. What sort of result are you expecting?

Siân Berry: We’ve had incredibly solid polling all the way through this election. The last set that came through yesterday [May 4] are variable and they do show that lots of people are still making up their minds. I’m confident that people are going to be looking at my manifesto, looking at the ideas I’ve put forward in this campaign, and the positive way I’ve done it, and coming over to us in much greater numbers over the next few days.

Josiah Mortimer: The reason we’re here is because these temporary accommodation residents at Denby Court are facing eviction by the Labour council. What has been your message to them and what have you taken away from talking to them?

Siân Berry: I’ve come here to talk to the residents of Denby Court who are part of a demolition scheme that’s planned by Lambeth. At the moment there are temporary accommodation residents living on the estate which is scheduled to be demolished. They have been here for years and they came to me in the London Assembly because they weren’t getting any joy from their council.

“I’ve got the Green councillors in London – who are fantastic – involved in this and they’ve made some changes and things are now much better repaired here. But these residents still don’t have the rights they need. They still haven’t got permanent homes from the council, so I’ve been talking to them about how we can fix that.

“There’s also the bigger things we can do on a London level like spending money that’s just sitting there in the housing fund, like getting some homes from developers and landlords, and ways in which we can improve their rights. We need Greens on every council in London. We need more Greens in City Hall so we can give residents like this a voice. It’s been really helpful to listen to them today.”

Josiah Mortimer: Who will you be giving your second preference vote to?

Siân Berry: “I’m going to vote second for Sadiq Khan. I think he’s not been as good as mayor as he could be but it’s very clear that Shaun Bailey, the Conservative candidate, wants to take London backwards in so many ways. He wants to rip out the Clean Air Zone. He is against reducing traffic in London.

“In City Hall the Conservatives have not been constructive opposition in the way that the Greens have. I think we have built a very constructive relationship with the current mayor on getting some thing out of him, so I’m happy to put him second. It would however be much better if there was a real Green mayor in City Hall.

“We would only get the transformation we need if we’ve got Greens leading the way.”