What we heard from newly re-elected co-leaders Siân Berry and Jonathan Bartley at the party's virtual conference. 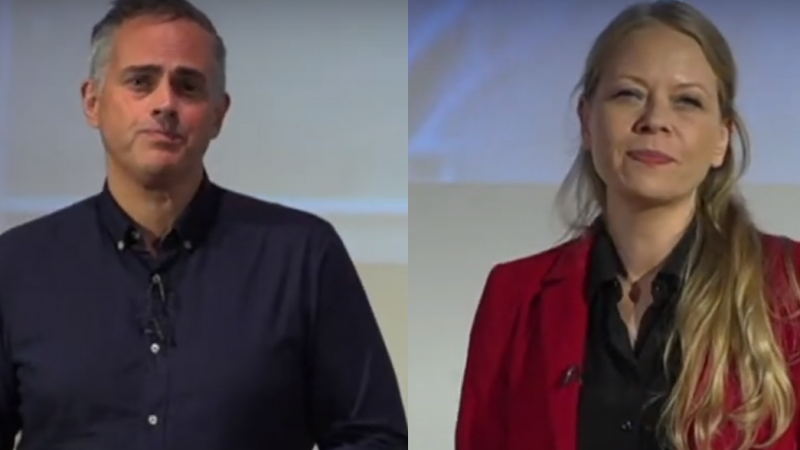 The Green Party of England and Wales conference has – like all parties – gone virtual, and saw the freshly re-elected co-leaders take to an audience-free stage on Friday.

Mayoral candidate Siân Berry and Lambeth councillor Jonathan Bartley delivered their verdict on the government’s coronavirus response, climate breakdown – and the party’s hopes for next year’s big round of elections.

Bartley began by echoing a question many of us have been asking: “What the hell is up with 2020?”

“Fires in the arctic and the US. Refugees in the channel. Thousands sleeping rough on our streets. A pandemic that has killed a million people…

“I was sitting at home a couple of weeks ago, and I switched on “Extinction: the facts” – the David Attenborough documentary. And I found the tears just rolling down my cheeks…Who is not moved by the countless species being lost? How, have we let this mass destruction happen?”

Siân Berry said: “It is people of colour and the working class who will suffer disproportionately from climate breakdown.

“People of colour and the working class who have always suffered disproportionately from health inequality, social inequality and racism.”

She added that it is these people who will are hit hardest by coronavirus, too.

“And we won’t get the virus under control without a test and trace system that works in every local area. We have been saying for months that the Government needs to work with local authorities, communities and public health teams. These are the people who can deliver,” she said.

Bartley praised the key workers who got Britain through the crisis: “Our most valuable workers recognised as the key workers that they are – running the vital services on which we all rely.

He said Britain had seen a ‘glimpse of something new’ in the coronavirus response. “Debt in our NHS paid off. Intervention to support people’s incomes. Rough sleepers off our streets…I think that deep down everyone believes that a different and better world might be possible.”

“We have proposed it for years. And it’s an idea whose time has come. A regular, unconditional  payment made to everyone. We can make poverty impossible. We can abolish destitution. And give everyone more life choices.”

Addressing the Black Lives Matter movement, Bartley called for reparations: “to create global justice and put right the legacy of the transatlantic trafficking of enslaved Afrikans, colonial exploitation, and our debt to the world for the pollution we have emitted.”

Berry called for ‘dissent’ to unjust government policies. “Our plan for recovery cannot be a re-run of austerity economics…With a Green New Deal and a basic income we can break free from the old thinking for good.”

Berry said that the Greens are the ‘political arm of a wider movement’: “Like our country, our party’s history is also one of movements and solidarity. Our party, our values – and our approach to leadership – grew alongside work among movements here in the UK that fought some of the most important battles of the last century.

She praised the party’s history: “Standing against unconscionable weapons of mass destruction, and against coal power plants, gas pipelines, oil drilling, fracking and nuclear power,” pointing to more recent campaigning: “We are forging new alliances for green energy and community controlled housing with renters and workers.”

She added that 2019’s local elections, which saw the Greens gain 86 seats, were ‘spectacular’.

“As a party, we could not be more ready for next year – 2021- to fight more winning campaigns in Wales and in London and in councils across the country. I cannot wait for next May,” the London Mayoral candidate said.

“The Green Party is a serious party, a major party now, one with more credibility than ever before, whose ideas and hard work make a difference,” Berry said.

Berry presented the Greens as having an important lobbying role: “In London we only have to campaign and pester for two or maybe three years now before the current Mayor takes up our ideas – on things like rent controls, preventing demolition and giving ballots to residents on estates, action on air pollution and traffic, green energy for the tube.”

“But we’ll only get change as fast as we need when we have a Green Mayor… Everywhere in the country, as a party now, we must work harder than ever to build our team, we must support each other better, bring forward new people, and train harder together to be ready for the serious and important work of having and using power,” she added.

Bartley closed his address with ‘an invitation’: “If you want to shape the future, not repeat the past. If you too feel that this is a moment of truth where every person must play their part. The Green Party is your home, so join us.”

Berry ended by saying: “New paths are only made when people take the first steps and walk in a new direction. So join us and let’s take those steps together. Because we – and you – know that better is possible.”