"We already have a press that’s very biased and not diverse, and a TV landscape that's open to someone like Fox coming in," the Byline TV co-founder tells LFF. 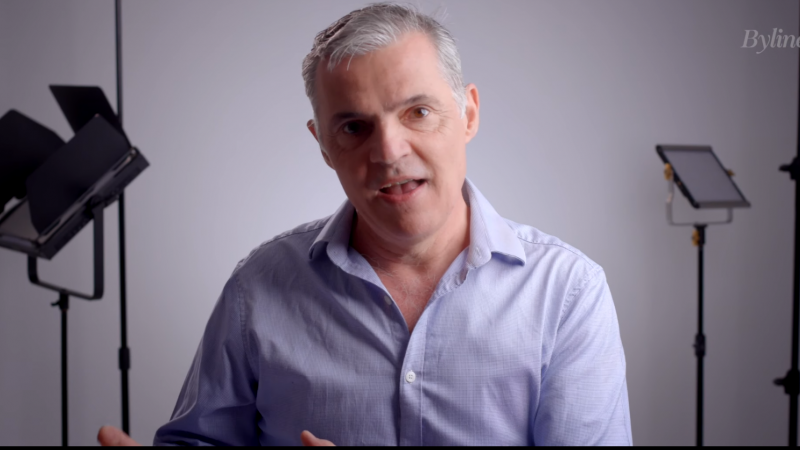 If you’ve seen some of the material Fox News puts out in the US, you’ll have been worried by the headlines: “rivals plan Fox News-style opinionated TV station in UK,” the rumours went in August.

Shortly after it was confirmed: Rupert Murdoch’s News UK will launch a new TV channel – and it’s already been granted a licence, if reports are to be believed.

“Our concern in this country is that we already have a press that’s very biased and not diverse, and a TV landscape that’s really laying itself open to someone like Fox coming in. It appears glossy and confident.”

Colegrave and colleagues at the investigative journalism outlet decided to do something: set up an alterative to a UK-equivalent of Fox News.

While broadcasters in the UK – unlike the US – must show ‘due impartiality and due accuracy’, an opinion-focused, Murdoch-backed station carries a lot of risks for those worried about polarisation and the British media.

Colegrave, the co-founder of Byline Times and Byline Festival, is concerned that broadcasting rules won’t protect viewers from partisan broadcasting. “Ofcom rules haven’t stopped Nigel Farage appearing on BBC Question Times something like 40 times over the past few years. We don’t really have much confidence in Ofcom,” he tells me over the phone.

Byline TV has already released several programmes, with 30 more in the making. While these are tricky times for broadcasters, the initially online-only Byline TV has a low cost base – and a lot of journalists (260 freelancers, according to Colegrave) at its disposal. “An online digital station is not that difficult to do. Is terrestrial TV really relevant anymore?” he asks.

Is it a race to beat News UK’s planned station? “We want to inoculate Fox News UK with the truth! It’s not really a race, but it’s definitely made us want to launch now rather than in a year’s time,” Colegrave says.

Byline TV is seen as the next ‘logical step’ from Byline Times, the print publication founded only last year. It now has 9,500 subscribers and is ‘just about breaking even’, with the print version funding the online news site.

Can it work? The backers don’t have a huge deal of experience running a TV station. But perhaps that has its advantages. “Peter [Jukes – co-founder] and I come to this fresh. My background is the music business and advertising, though I ran a TV film production company called The Mission in the ‘90s.

“We’ve found so far that being slightly outside the establishment has worked to our advantage. We’re trying to break barriers,” Colegrave says. He and Jukes are part-funding the first three months of production themselves, with the hopes of getting subscribers for exclusive content and fund the outlet’s wider work. After a few days, the station is already bringing in £1,000 a month.

“It’s the same [funding] model as the paper – we’ve never wanted to take grants. It’s best if the audience itself likes what we’re doing…We like that model,” he tells LFF.

“We have access to a lot of very interesting people.” The station already has a few prominent journalistic names involved. Ex-Panorama journalist John Sweeney is involved, as well as US-based writer Zarina Zabrisky and Byline Times editor Hardeep Matharu. As well as running investigations, the online TV station will feature live shows.

“The news is quite depressing, but there is a lot of news – and a lot isn’t being covered.” Byline Times has focused on scrutinising contracts handed out to firms during the coronavirus crisis – as well as the far right’s involvement in anti-lockdown activism and conspiracy theories.

Being Left Foot Forward, we had to ask: is Byline TV a left-wing platform? “We are very much keen on scrutinising and holding to account the establishment – the establishment is quite a right-wing government. That’s always going to swing us to the left. If a Labour government was in, we’d be holding them under scrutiny too,” Colegrave says, adding: “We’re very worried that the government has moved to the right, and far-right movements are behind anti-mask and anti-vax protests. It costs lives. It’s serious stuff.”

Watch the trailer for the Byline TV launch.