The Climate and Ecological Emergency Bill seeks a drastic reduction in emissions, to keep within the 1.5 degree Paris Agreement limit. 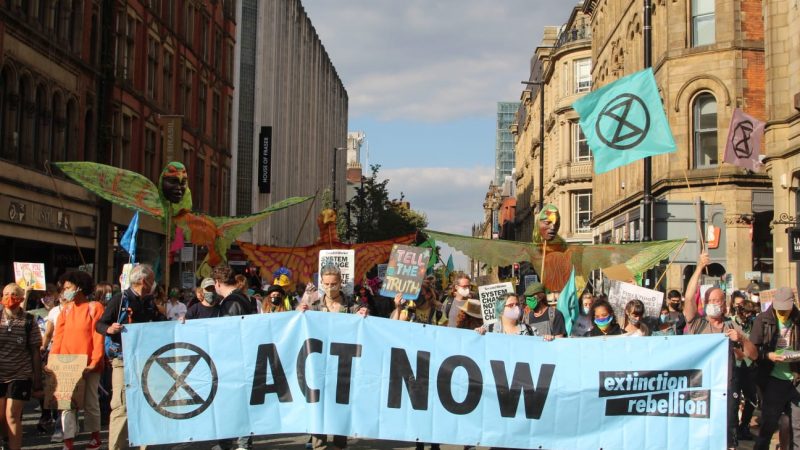 A landmark new bill, drafted by an alliance of scientists, academics, lawyers and environmentalists – aiming to tackle the biggest environmental crisis of our time – will be introduced in the House of Commons today.

The ‘transformative’ Climate and Ecological Emergency Bill (CEE Bill) – supported by Extinction Rebellion and being proposed by Caroline Lucas MP in the Commons on Wednesday – aims to provides a clear framework to deliver the UK’s commitments to the UN 2015 Paris Climate Agreement.

According to backers, the CEE Bill would ensure that the UK Government plays its fair and proper role in limiting global warming to 1.5°C, and that it actively conserves the natural world by protecting and restoring the UK’s ecosystems.

Extinction Rebellion marchers in Cardiff called on their MPs to back the Bill yesterday, as they stood outside the Senedd.

An emergency, government-backed Citizens’ Assembly would officials decide which measures would be included in an emergency strategy, giving the public a say in the UK’s pathway to ‘net zero’.

Though it stands little chance of securing government backing, the First Reading is a boost for the calls of Extinction Rebellion, as thousands take to the streets again for a fortnight of action across the country. Tuesday saw dozens of arrests as protesters took direct action in Westminster, Cardiff, Manchester and elsewhere.

The UK was the first major economy to set a net-zero emissions goal last year, under Theresa May. However, campaigners say the 2050 target is too late, with no clear road-map to get there. 2050 could lock in decades of catastrophic climate change, green activists argue. Many want to see a target of net zero by 2030 instead.

The recent Select Committee-backed Climate Assembly – which sought to involve the public in finding ways to reach net zero – has no guarantee that the government will back its proposals.

The sponsor of the bill, Green MP Caroline Lucas MP, said: “This Government needs to start showing the climate leadership it so often boasts of, and that means supporting measures in line with the scale of the crisis we face.

“The Climate Change Act was a good start, but it has been overtaken by the accelerating crisis, and it leaves far too many critical areas like aviation and consumption emissions unaddressed. It needs updating and strengthening. We face a nature crisis too, which is hampering our ability to address the climate emergency.

“It is absolutely vital that we tackle both at the same time. This Bill does that and rightly creates a role for a citizens’ assembly to work with MPs to transform our society in a just and fair way. I’m proud to sponsor it in Parliament today.”

The public is being asked to lobby their local MP to support in the Bill, and call for its speedy passage through Parliament.

Amy McDonnell, a co-founder of the CEE Bill Alliance, said: “The UK’s goal of achieving net zero by 2050, according to its own Committee on Climate Change, only gives us a ‘greater than 50%’ chance of averting climate catastrophe.This is nowhere good enough. According to the IPCC 2018 report, the world needs to keep warming to 1.5°C to avert disaster.

“The UK Government must adopt this target and, as host of the next COP climate summit in November 2021, must show the world how it can be achieved. It’s time for the UK, as a world leader, to be bold with its environmental ambitions and the CEE Bill offers the framework to do it.”

Supporter of the Bill, Kumi Naidoo, former Executive Director of Greenpeace International, said: “The urgency and scale of the response required to tackle the emergency facing life on Earth is in this Bill, which defines the path needed to avoid the catastrophe outlined by the United Nations. Based on the accepted science of the IPCC, it is farsighted, aiming to protect those at risk, now and in the future.”

Other supporters include the founder of 350.org, environmentalist Bill McKibbon, and co-founder of the Transition Network, Rob Hopkins.

Aims of the Bill

Limit global warming to 1.5°C: To do so, the UK must reduce its emissions drastically; take account of its entire carbon footprint, domestically and internationally; and circumscribe reliance on speculative future carbon capture technologies.

Conserve the natural world: This requires the UK to focus on restoring biodiversity, soils, natural carbon sinks; to take steps to mitigate the damage to nature caused by UK supply chains, domestically and internationally; and account for the UK’s entire ecological footprint.

Giving the people a real say: An emergency Citizens’ Assembly will empower MPs to make tough decisions, and give ordinary people a real say in the pathway of a fair and just transition to a thriving zero-carbon society.