Pictured: Tory MP Karen Bradley, speaking out against the shut down of virtual Parliament procedures. 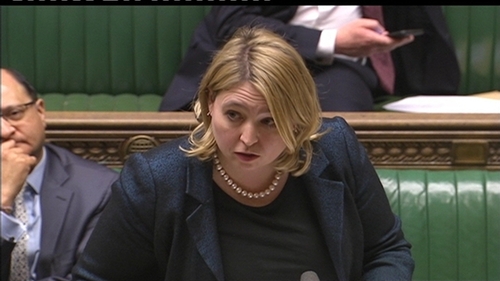 When a Conservative MP warns of an ‘elective dictatorship’ under her own government, you should be getting worried.

That was the prospect raised by Karen Bradley, chair of the Commons procedure committee, on Tuesday. It came as scores of MPs were effectively locked out of Parliament.

MPs were debating the governments proposals to scrap virtual participation for members. It’s a system that has worked remarkably well during the pandemic. Clearly it worked so well that Minister for the 18th Century Jacob Rees-Mogg was keen to abolish it as quickly as possible.

Tuesdays proceedings would have been derided as the tactics of a tin-pot tyrant, had they happened in another country. MPs with health conditions, those who were ‘shielding’, those who were caring for vulnerable partners – were simply unable to turn up, to vote against scrapping virtual proceedings.

Remote voting and video participation has protected vulnerable members of Parliament, their staff, and those they would come into contact with travelling across the UK. The government had simply closed off that option, limiting the MPs who could have their say to…MPs well enough to attend. By any standards, this was a rigged franchise.

The Deputy Director of UCL’s respected Constitution Unit summed it up in a nutshell: “The government succeeded in silencing scores of MPs who can’t currently attend parliament safely. And it probably managed this only by ensuring that those are thus silenced could not take part in the decision. Can anyone explain how that is compatible with democracy?”

The Procedure Committee put up a strong fight. But 90 Conservatives did not attend. 122 others were absent – including 69 Labour MPs and 40 SNP MPs.

The SNP’s Ian Blackford was forced to speak on behalf of many of his colleagues. But he could not vote for them. In an impassioned address, he pointed out it takes some Scottish colleagues 30 hours to get to Parliament and back at present. In what world does scrapping remote contributions help MPs represent their constituents?

Instead, we had the farce of MPs lining up for nearly a kilometre, queueing to vote in Westminster Hall. The Shadow Minister for the Cabinet Office, Cat Smith, nearly fainted. Voting will take at least 30 minutes under the absurd new set-up, double the time that remote voting took – and risking members’ health.

The government insist that Parliament must return to ‘normal’. But let’s not forget: we are still in a pandemic. Tuesday’s figures show there were over 1,600 new Covid cases, and 324 deaths in a single day. To compare, South Korea has had just 273 Covid deaths. Greece: 179. Norway: 236. Finland: 318. In the whole of the pandemic.

The government say scrutiny is being undermined by MPs not being present. But the government has, in a stroke, drastically cut the number of MPs who can participate and speak up for constituents. Just 427 MPs voted in Tuesday’s division on maintaining virtual proceedings – compared to over 600 in the last online division. Many simply could not put their health and their loved ones at risk by travelling hundreds of miles to vote.

31 Tory MPs rebelled to back the Procedure Committee’s proposals to keep remote participation in place. It is likely that it would have passed had Tuesday’s votes been conducted remotely, as they should have done.

“These measures do not just look discriminatory: they are discriminatory,” said Tory rebel Caroline Nokes. She was echoing the sentiments of the Equality and Human Rights Commission. She was right. We heard stories of disabled MPs, those who are caring for those shielding, those who are in high-risk categories – being sidelined. They have been silenced.

While Johnson appeared to u-turn at PMQs, saying proxy voting would be available for shielding MPs, we’ve not yet seen the detail. And it still fails to address the fact that at-risk members will not be able to speak in the chamber.

This debate isn’t a battle about a technicality: it’s about representation, and power, and the arrogance of an over-powerful executive. And it’s a stark warning about this government’s approach to politics. What happened yesterday was a dereliction of democracy. We should all be worried.

Josiah Mortimer is co-editor of Left Foot Forward. He also works with the Electoral Reform Society.