They're peddling a myth of 'free trade'. 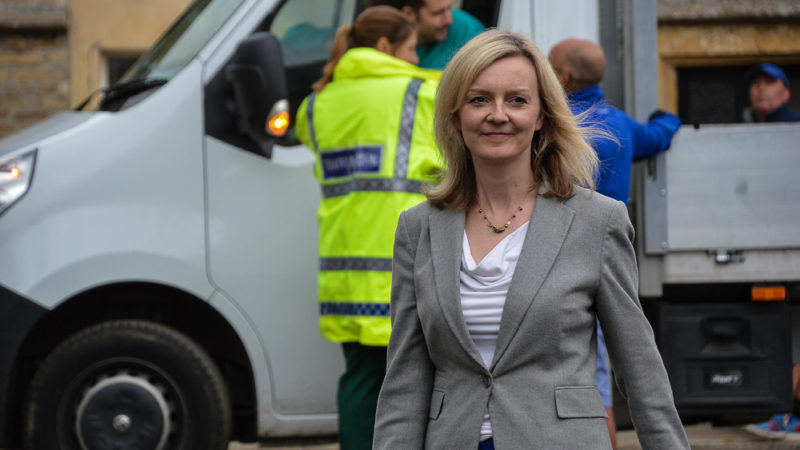 Today, UK Trade Secretary Liz Truss and US Trade Representative Robert Lighthizer are meeting virtually to start negotiating a new free trade agreement between the US and the UK.

They are pressing ahead despite the ongoing tragedy of the Covid-19 pandemic, and a public outcry over the risks posed by a deal to public services, the affordability of medicines, food and farming standards. The UK has made a deal a symbol of the UK’s post-Brexit independence, even if it means an unequivocal own-goal.

This deal is part of broader agenda to be seen as a ‘free’, ‘open’ and ‘independent, free-trading nation’. This imagery belies the predatory role that the UK and other Global North governments have played using trade rules to lock in Global South countries to exploitative relationships, and entrench corporate power over our lives.

Outlined in an article written by Trade Minister Liz Truss and her opposite numbers from New Zealand, Australia and Singapore last week, this vision seeks to peddle neoliberal trade deals as a solution to the problems they have been central in creating, even as coronavirus is revealing in the starkest possible way who our economy works for, and against.

In the last four decades of hyper-globalisation, inequality has increased, and financial crises have become far more frequent. For the ‘decades of progress’ the authors speak of, we have remarkably little to show for it in the UK.

Inequality today is far higher than it was in the 1960s or 1970s; life expectancy growth has stalled and fallen for the poorest women in our society, there are growing gaps in health inequalities, and for the population as a whole, health is declining.

We are being told that ‘trade barriers’ must be lifted, both to address the crisis and to reap the benefits of globalisation. But what is a ‘trade barrier’?

One the most well-known such barrier identified in a US-UK trade deal is the UK’s regulations which prevent chlorine-washing chicken carcasses, but the concerns are much broader.

In the context of TTIP, TTP, CETA, and now the US-UK Trade Deal, trade barriers included anything that restricts the potential profits to be made by transnational corporations.

These are some of our most prized social standards and environmental regulations, including around food safety, online privacy, banking regulations and climate change.

Trading away our jobs

As the UK and US plough ahead this week with a toxic trade deal, our government’s own analysis of the purported financial benefit of a US trade deal is shockingly meagre – estimated at an increase of only 0.16% to the UK economy by 2035.

An official impact assessment of the impact of the now defeated TTIP on the UK said that the deal would lead to the loss of at least one million jobs in the EU and USA combined.

Far from being able to attribute increases in employment and social cohesion to ‘free trade’, War on Want research has shown the opposite: that the free market model of trade liberalisation leads to the collapse of industries and loss of jobs.

In many African countries, rapid and across-the-board trade liberalisation led to a pattern of deindustrialisation and huge job losses in the 1980s and 1990s. African countries which hope to re-industrialise would now have to back-track on previous international trade commitments to do so.

This is without looking at the issues of the quality of jobs created by ‘new generation’ trade deals, or the impacts on workers’ rights and working conditions. Campaigners in North America say that the impact of NAFTA has been lost jobs, lower wages, and deeper inequality.

Half of the global workforce currently risk having their livelihood destroyed as a consequence of the Covid-19 pandemic. What the world needs is for our governments to focus not on new trade deals that deepen existing inequalities and risk jobs, but a global plan for a just recovery and just transition that includes jobs and income guarantees.

Free-trade advocates’ vilification of protectionism is hypocritical and ignores the lessons of history. In reality the UK and other wealthy countries have and continue to use trade rules to create carefully crafted mixes of liberalisation and protectionist measures, used alongside as gunboat diplomacy, to advance their interests while preventing developing economies from doing the same.

As economist Ha Joon Chang has noted, almost all wealthy countries have relied on tariff protection and subsidies to develop their industries. In the 18th century, Indian textiles dominated the global export market.

Britain used extremely high tariffs on the imports of Indian textiles into the UK, while simultaneously importing very cheap British textiles into India, with the effect of, and many say with the intention of, crippling the Indian textile industry and ensuring global dependence on British exports.

In the 19th Century, in order to rebalance the trade deficit that the UK had with China due to British consumption of Chinese tea, silk and porcelain, Britain stepped up imports of opium into the country, fuelling opium addiction and a demand for British opium imports. China was forced into a free trade relationship with Britain as a consequence of the opium wars.

This continued at the World Trade Organisation (WTO). At the failed Doha round of negotiations, despite pressing for Southern countries to open up their industrial and services sectors to foreign imports, Northern countries refused to reduce their agricultural subsidies (a form of protectionism).

The UK only embraced free trade at a point in time when its industrial supremacy was unquestioned, when it commanded 46 percent of world trade in manufactured goods despite having only 2.5 percent of the world population.

Trade deals with Global South countries have often inhibited national industrialisation capacity – this would include the kind of capacity that Southern countries need to address current and future pandemics.

Far from demanding that other countries abandon protectionism, countries must be free to use protective trade barriers where they contribute to public welfare, and to support burgeoning domestic industries that would increase domestic capacity and skills in higher value production.

Ever since wealthy countries stopped finding the WTO a useful space to pursue goals of deregulation, privatisation and the protection of investors rights sufficiently quickly, they turned to other avenues – deals such as the Trans Pacific Partnership (TPP), which Liz Truss is now aiming for the UK join.

It is deeply alarming that the UK government is promoting the idea of joining TPP at a time when corporations are preparing to use ISDS-type provisions in it to sue countries for millions of dollars for decisions taken to save lives during the pandemic.

No one would deny that facilitating trade in essential goods to tackle the pandemic is critical. Indeed, trade campaigners are urging that the government’s attention should be focused on dealing with the public health and economic crises. However, as the crisis rages, the Department for International Trade is busying itself with negotiating a new toxic trade deal with Donald Trump’s administration that risks our NHS, our food and farming standards, digital rights and much more.

Ensuring that people affected by Covid-19 get what they need can never be a carte-blanche for trade liberalisation, but must be an imperative to reject neoliberal trade deals and reform our economy in the interests of the many.

The millions of people across the globe who object to deals like TTIP, CETA the TPP, and now a US-UK trade deal, do not fundamentally reject trade as a concept. We object to the fact that these deals are not really about trade at all.

These deals have at their heart a de-regulation agenda, and aim to entrench corporate and investor power over our societies. We reject trade deals that are deepening social and global inequalities, locking in extractivist relationships with the countries of the Global South and granting extreme rights to investors over our policy space and public finances.

This pandemic is still taking shape, but for most of the world, this comes on top of the crises of inequality, poverty and climate, that demand a comprehensive and ambitious solutions. Now is the time for governments to stop negotiating secret deals that will only deepen our crisis.

Leah Sullivan is a Trade Campaigner at War on Want