The future of university teaching and research goes beyond the argument about pensions. So does the strike. 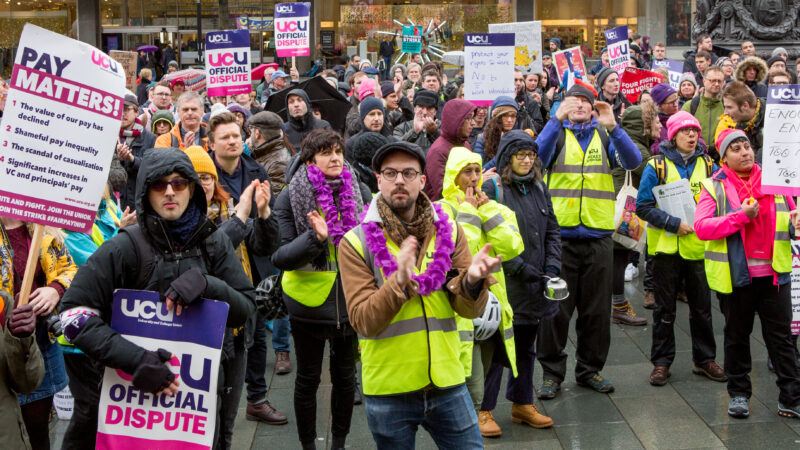 I am not sure how many people were aware of it (though news that the fighting fund has brought in over £100,000 is a welcome sign of public support), but members of the University and College Union have been on strike this last week and a half. The union includes lecturers as well as those who support the wider work of a university. I was one of those who participated in the strike.

The principal reason for the strike relates to pensions. Like many employers, universities have been slowly hacking away at our entitlements, effectively making us pay more for less. They claim that there is not enough in the pension pot to which we all contribute but UCU does not believe them – and there are strong grounds for thinking the union is right. Last year there was a big strike about this and it concluded with employers and union agreeing to the matter being investigated by an independent group whose recommendations both sides would accept. The group having reported, the employers have gone back on that agreement.

But the strike is about more than pensions. It is in effect a protest at the general direction of higher education over the last decade or so. Pension entitlement has been reduced at the same time as employers have squeezed our pay and increased our workload. Lecturers now teach more students than ever before, while being expected to produce more ‘world class’ research and also showing what ‘impact’ we make on the world beyond the academy.

To further reduce staff costs, an increasing number of younger staff are on short-term and part-time contracts. While doing all this, employers have reduced the number of support staff – and out-sourced many services – to replace human faces with cheap and generic software that is not up to the job. This creates pressure on those who remain in post and means that services to students have got much worse – which might be why so many have supported the strike, despite being harmed by it.

The icing on the cake is the extent to which executive managers’ pay has increased well beyond inflation.

Those are the facts as I see them. But over and above all that, I went on strike because I have been almost completely alienated from my place of work and feel that there is no other way to change things. There are still aspects of the job I enjoy – writing, research and teaching are things I am glad I do: when you see something click in a student’s mind, and you’ve helped in that, that can make it all worthwhile. But the increased and multi-directional expectations thrown at us by irresponsible managers has got too much – especially for those less well-placed than me.

I don’t claim that those working in universities are uniquely under the cosh – most definitely not. The above will probably be familiar to those in very different kinds of jobs. But that does not make things right.

There is no easy solution to this: all universities appear to be managed by those with the exact same assumptions. Politicians have rarely taken higher education at all seriously.  Labour says it will abolish tuition fees – but that won’t solve matters: in fact if it reduces university income but increases student numbers it could make them worse. The Conservatives offer absolutely no hope of positive change. It might be, very sadly, that more strikes will be necessary to make employers realise that they have to change their approach. The ball is in their court – but they currently do not want to play.

Steven Fielding is Professor of Political History at Nottingham University.

One Response to “Fighting for the future of universities”