The report says anti-austerity measures have increased employment and growth and cut down the deficit. 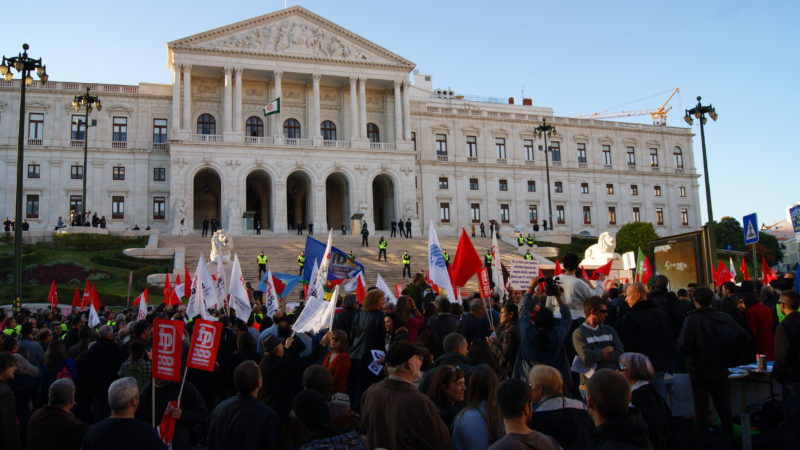 A new report has claimed that anti-austerity policies pursued by the left-wing government of Portugal have boosted the Portugese economy.

In return for a bailout, the European Union imposed privatisations and cuts in salaries, social security and services on Portugal – through a centre-right Portugese government.

After elections in 2015, the centre-left Socialist Party formed a coalition with the Communist Party and another left-wing group called Bloco Esquerda.

These left-wing groups helped pressure the Socialist Party into an anti-austerity programme.

Recently privatised companies were re-nationalised, the minimum wage rose by 20%, four national holidays were re-established and pensions were unfrozen.

As well as spending increases, taxes were cut on consumption in restaurants and on wages – although taxes were increased on luxury real estate and large firms.

The economic effect of this, the report says, was the return of economic growth. This was 4.3% in 2016/2017 after falling 7.9% during the austerity measures.

A public deficit is when a country’s spending is more than its income – the UK’s deficit is 1.9% of GDP.

The report points out that this was all possible while remaining in the European Union – and while following the EU’s rule that budget deficits should not exceed 3%.

In his foreword to the report, Labour MP Clive Lewis said that the Portugese example had lessons for the UK. He said:

““Portuguese socialists were able to prove that austerity measures had been broadly economically damaging as well as ideologically driven. In doing so
the country proved both an inspiration to others and a test bed for a new relationship between individual nations and the institutions of the EU.”

“This is a significant intervention for those on the left who argue for a Brexit, or “Lexit”. Many of the rules that are seen as obstructive to the socialist vision, whether on public ownership, outsourcing or state aid, are either misunderstood, have been superseded or are flexible.”

“You do the EU no favours by ignoring its faults, but it is not a fixed entity, and what look to be its long‑term strategic goals are subject, always, to the will of its members. It can only realise the ambitions of its founders, of peace, reconciliation, solidarity and broadly distributed prosperity, if its component nations are fighting for those ends.”

20 Responses to “In Portugal, anti-austerity policies have boosted the economy, says report”