The ads call for an end to Brexit and for freedom of movement. 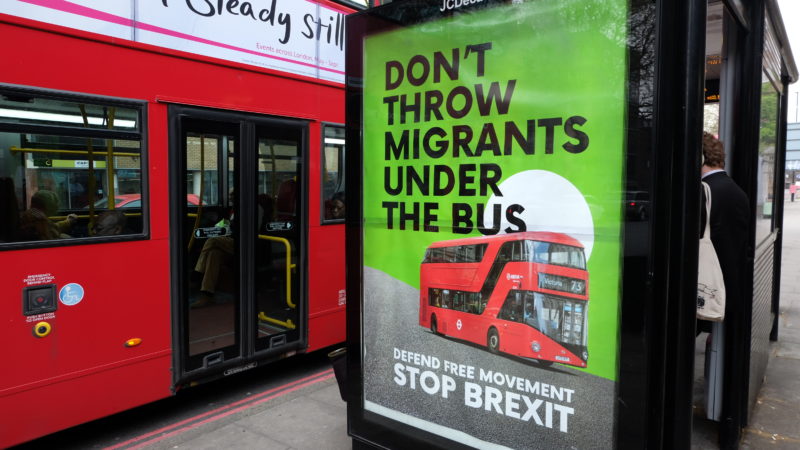 Rogue adverts are showing up on London’s tube network and bus stops, opposing Brexit and standing up for freedom of movement.

The unbranded posters, which have apparently been put up without permission, started being noticed on Tuesday.

Some unusual ads were spotted at bus stops and on the London tube👀 #StopBrexit pic.twitter.com/qcXjmMnL1n

A spokesperson for Another Europe is Possible told Left Foot Forward that he had “no idea” where the ads had come from, adding “but it’s great to see eye catching materials making an unapologetic  case for free movement.

“Abolishing free movement would amount to the biggest expansion of borders in recent history, and although the two can be separated, the surest way to save free movement is to stop Brexit.”

Labour’s current policy is that ‘free movement will end after Brexit’, but there are growing calls for the party to shift.

Last week Shadow Home Secretary Diane Abbott insisted that Labour will put economic prosperity ahead of ending free movement of people from the EU in any compromise Brexit deal.

Tuesday evening update: A TfL spokesperson said “This is not an authorised advert. It is fly posting, which we take extremely seriously.

“We have instructed our contractors to immediately remove any found on our network.”

8 Responses to “Rogue anti-Brexit posters pop up across London”