The Church should we working to oppose nuclear weapons, not celebrate them, writes Natalie Bennett. 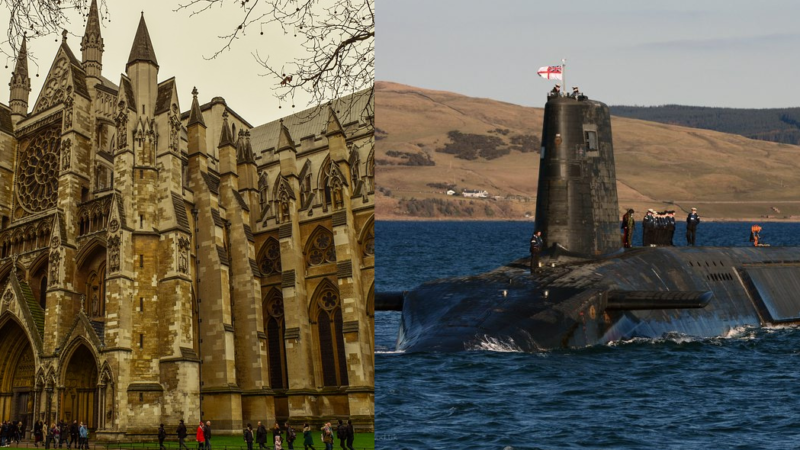 The last time I was within Westminster Abbey was in 2014. It was a big national occasion, and as might have been expected, many of the “great and the good” were there.

But the message we were hearing on the anniversaryof the start of the First World War, was an essentially subversive one: that war is hell, militarism and jingoism are dreadful threats to us all, and we have to strain every sinew to keep the peace.

The key text was Isaiah II: that we must beat swords into ploughshares.

I can’t imagine that will be central to another event planned for the Abbey on May 3: The “National Service of Thanksgiving to mark 50 years of the Continuous at Sea Deterrent”. In other words, astonishingly, to give thanks for nuclear weapons.

When I heard about this planned service, I thought back to my 12-year-old self, on one of my moments of political awakening. I was reading in bed at 3am (with a torch under the blankets so as not to alert my parents).

It was dead quiet in the Australian suburbs then, as I finished Neville Shute’s On the Beach, a novel in which there’s been a nuclear war and Australia is the last functioning society, as the nuclear clouds and destruction bear inexorably down on it. It was terrifying.

It awoke me to the threat of nuclear war, a threat that is just as alive, real and and pressing now as it was back in 1978. That threat is still rightfully terrifying people of all ages, including the scientists who maintain the Doomsday Clock, who have the hands set at two minutes to midnight.

Speaking as someone who – before the last US election – used to brandish at public meetings the prospect of Donald Trump being in control of nuclear weapon, to general gasps of horror, it isn’t hard to see why.

That serious, immediate risk to the future of human life on earth, isn’t something to give thanks for. To do so is, as one Christian commentator said, “obscene”.

Indeed, the official Church of England position is this: “Nuclear weapons, through their indiscriminate and destructive potential, present a distinct category of weaponry that requires Christians to work tirelessly for their elimination across the world.”

And the UK is, of course, a signatory to the Nuclear Non-Proliferation Treaty, promising to work towards the abolition of all nuclear weapons.

I do want to draw a line here. At Prime Minister’s Questions this week, both Theresa May and Jeremy Corbyn paid tribute to the submariners and other service people who’ve served in difficult, sometimes terrifying, conditions.

I’ve no problems with that – men and women who have made a choice to serve their country, and are doing what their political masters tell them, is their duty. I am happy to pay tribute to them.

But thanksgiving for nuclear weapons is both deeply morally inappropriate, and only serves to highlight the way in which we are failing to live up to the treaty obligations which we’ve signed – to work towards the abolition of these hideous weapons of mass destruction.

That failure of the declared nuclear states to live up to the obligation they accepted is something the majority of the world’s nations are all too well aware of, and a big factor in the fact that the majority of states back the call for a global ban on nuclear weapons.

To say the UK is out of step is a major understatement, with 123 other states backing the treaty. We’re a minnow in terms of the nuclear powers, with 1% of the world’s predominant weapons of mass destruction, but we’re playing a major role in helping to apparently legitimise the holdings of the other 99%.

We could be a really significant part of the solution, were we to decide to join the states calling for the global ban and agree to get rid of our weapons. We’d also save ourselves a handy £205 billion in the process.

The only world in which we’re offered real security, one in which we can turn the hands of that Doomsday Clock back into a safer zone, is one with a global ban on nuclear weapons. Now that really would be something to give thanks for every day of the year.

Natalie Bennett is former leader of the Green Party and a Contributing Editor for Left Foot Forward.

3 Responses to “Dear Westminster Abbey: The threat of nuclear annihilation is not something to ‘give thanks’ for”