Some outlets refused to use the word 'terrorist'. Others published the killer's views unfiltered. 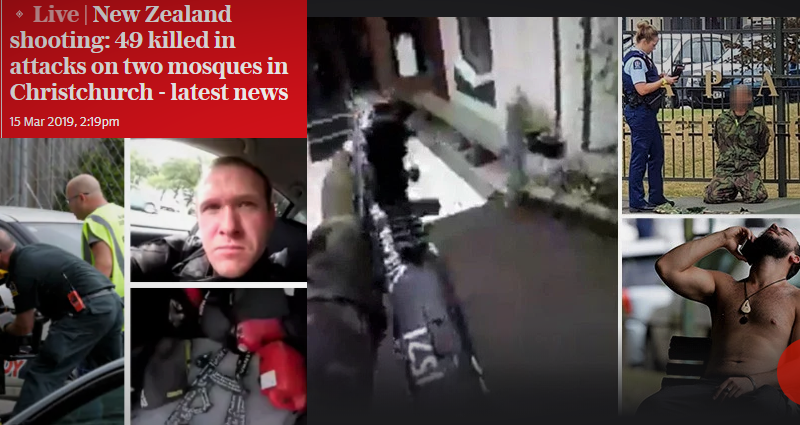 As the full scale of the horrific events in Christchurch became clear today, so too did the nature of the attack: it was – as New Zealand PM Jacinda Ardern described it – terrorism.

But while most New Zealand outlets echoed the Prime Minister’s description, some UK media outlets appeared reluctant to describe the white attacker as a terrorist – while others promoted the killer’s own disturbing material.

The killer published a manifesto saying his violence was motivated by fascist politics, and ranting about a ‘white genocide’.

The MailOnline‘s headlines this morning avoided mentioning the term ‘terrorist’:

Do you think MailOnline would use the phrase 'suicide vest' without mentioning the word 'terrorist' if the shooter was brown? pic.twitter.com/La7qdoQKqg

And the site allowed readers to actually download the killer’s manifesto, in a shocking move condemned by Labour deputy leader Tom Watson:

It’s deeply concerning and irresponsible that mainstream news sites are giving a platform to the hateful extremist violence that has devastated so many lives, particularly after the New Zealand authorities have asked for the footage not to be shared.https://t.co/HCjZr98CWW

No mention of terrorism on the Evening Standard homepage pic.twitter.com/GYk2Q4bvbP

The Telegraph did manage to describe the ‘terror’ – though not in its main headline:

Telegraph now use the word 'terror' though not in the headline pic.twitter.com/eKEDmgdnAK

Meanwhile, the Sun homepage featured an animated GIF of footage taken by the shooter himself – just before he killed people in a mosque. One Twitter user accused the publication of being ‘complicit’ in terrorism.

New Zealand police had urged outlets across the world not to use the footage taken by the terrorist.

“The bloody terrorist attack in Christchurch was carried out by a far-right activist who has published a manifesto explaining why he did it. It is full of praise for other anti-Muslim activists and ideas. This is where the ideologies of visceral hatred end up.

“The terrorist’s manifesto uses the stock phrases of the alt-right to justify murder, talking of ‘white genocide’ and citing spurious statistics about birth rates to explain away the savagery they have inflicted on people simply engaged in practising their faith…

“The attacker’s manifesto specifically says he wanted to ‘incite violence [and] retaliation’ against Muslims.”

A spokesperson for the anti-racism group urged outlets to call the terrorist attack out for what it was:

“This was a mass terrorist attack, pure and simple, and should always be referred to as such. It was not simply a ’shooting’ or a ’tragedy’. Those who push anti-Muslim hatred and prejudice should reflect very strongly on their words today, in the shadow of these horrendous killings, which were designed to sow fear, hatred and terror.”

Yet some tweets by the Daily Mirror focused on the attacker’s ideas – rather than the horrific nature of the murders:

these Daily Mirror tweets are an object lesson in how not to cover terror attacks pic.twitter.com/5xInHYRmXd

The paper even – until faced with outrage – ran footage filmed by the terrorist himself:

For a brief period this morning the Mirror website ran some edited footage filmed by the gunman in Christchurch. We should not have carried this. It is not in line with our policy relating to terrorist propaganda videos

One reader commented: “This is still missing the word ‘sorry’…” Indeed.