The students are exploring legal options over alleged discrimination, following protests on Wednesday. 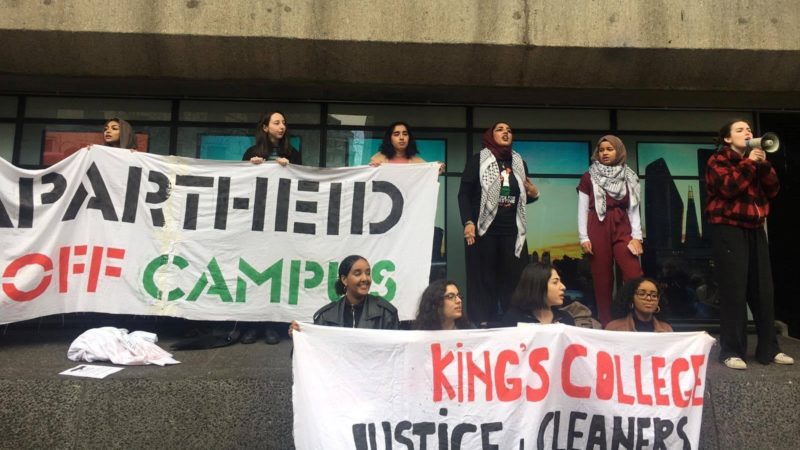 Activists are mounting a fierce challenge to King’s College London management, after some students deemed a ‘threat’ were denied access to the university during the Queen’s visit on Tuesday.

Campaigners from the Justice for Cleaners campaign, the Palestine solidarity campaign and other students demonstrated at the University’s Strand campus on Wednesday. Over 100 people were estimated to have attended the demonstration organised with 24 hours’ notice.

One activist who didn’t want to be named told Left Foot Forward:

“From the little conversation we had with security manager – they had a list of prominent political activists.

“They decided to block all entry to all facilities at KCL, even though the [Queen’s] event was in a different part of London.”

The activist said there had been: “No communication beforehand…people found out when they tried to scan their way in. They were told to come back at 2:30pm.

“After enough people asked, we got told that we were a security threat because of the Queen’s visit, which is flattering.

“After a lot of persuasion those with exams managed to get in.”

The activist said there were two campaigns from where organisers have been targeted – KCL Action for Palestine and the Justice for Cleaners campaign. “There are other campaigns but it’s just left-wing groups who were targeted.”

Students are now demanding a full apology and compensation, alongside a commitment to reduce ‘securitisation’ on campus.

“When trying to scan my ID Card to access, as I do daily, it didn’t work. I went to reception to inform them of the issue. At this point I began to get nervous of being late to for my presentation.

“The reception took my name and student number and asked me to wait a moment. The receptionist took a slip of paper out from next to her and on it I could see letter and numbers, presumably student names and ID numbers. After reading the note, they said plainly that I was not allowed on campus.

“On asking for an explanation, I was only told that I would not be allowed on campus until 2pm, and nothing more. I explained that I needed to give an assessed presentation but received the same response. At the same time I messaged my friend, who told me the same happened to her on the basis that she was a security threat to the Queen.”

“We know of 10 people who got banned and the majority are Muslim women of colour. Of the 10, only two white people who got profiled. There’s certainly a strong racial and gendered bias.”

There is also an employment angle to a potential legal challenge: at least one worker alleges they could not access the campus for a shift in Bush House, where the Queen was visiting.