Wera Hobhouse is following the school strikers and green campaigners in calling for a more ambitious approach to tackling climate change. 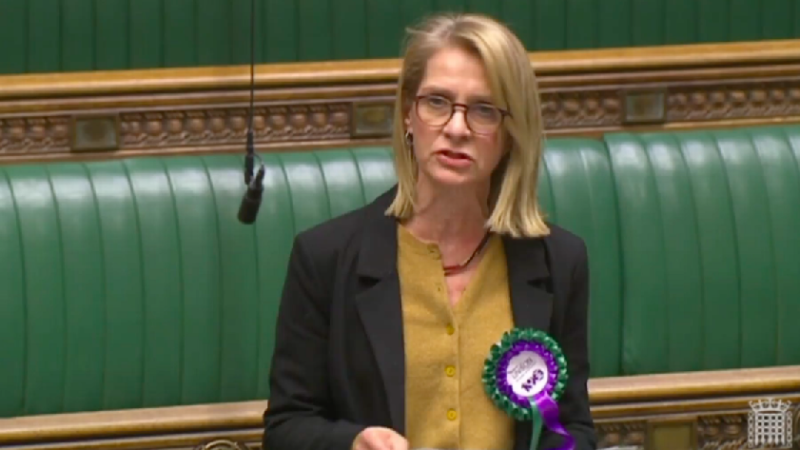 After the hottest February on record – and a wave of walkouts by schools students – climate change is back on the agenda. And it’s beginning to be heard again in Parliament, too.

Thursday saw what was reported as the first Commons debate on climate change in two years. Just a handful of MPs turned up.

The parliamentary battle against climate change, it seems, is being led by just a small core of politicians.

One of those politicians – alongside Layla Moran and Green MP Caroline Lucas – is Liberal Democrat’ climate change spokesperson Wera Hobhouse.

When I speak to her, she takes the chance to back the ‘striking’ school students who have helped put climate change back on the agenda. As a former secondary school teacher, she has urged her party to support the school strikes. “I would support another strike if that’s what they decide to do.”

This spring will see climate change protests kick off on a scale not seen for years, organised by ‘Extinction Rebellion’ – a group who have already orchestrated mass direct action across the UK. Would Hobhouse back them? “Yes – that’s the group that have put their oomph behind the young people. My door is open!”

Part of the desire to back direct action stems from the simple fact that time is running out. “We need to limit warming to 1.5 degrees or face catastrophic consequences. And we need to become carbon neutral much earlier than that.”

She points to research by the Centre for Alternative Technology which shows it is possible to become carbon neutral by 2030.

That call goes far beyond the Lib Dems’ official policy of being carbon neutral by 2050. Would she support a more radical policy?

“I want to look at the possibilities of making this happen. We should set realistic targets, but we should get there far before 2050,” though she doesn’t want to ‘nail my colours to the mast’ with a specific date.

Either way, an earlier target would require a radical shift in policy. With oil companies calling the shots, I put it to Hobhouse that it might even require a takeover of the energy market.

“You don’t need to be super radical or nationalise companies and take over their assets – the market or subsidies will regulate that stuff…Why do we develop nuclear energy? They’re getting large subsidies.”

“These changes can happen very quickly: Chris Huhne’s solar subsidies got the industry going…It’s in the hand of the government. You can change the whole energy market by changing to whom you give subsidies,” she tells LFF.

But even a shift in subsidies come against huge resistance from oil companies. “Of course, the government is under pressure and being lobbied – but that’s how it happens. Fracking happens because they give money to the Tories. Donald Trump rips up climate change because he got huge donations from energy firms.” She suggests that a government can and should overcome these pressures.

Many progressives are calling for a comprehensive ‘Green New Deal’, inspired by left-wing campaigns in the United States. I ask her about whether the Lib Dems would get behind those calls. Hobhouse appears uncertain about the concept, saying she would need to ‘look at the details’. “I’m cautious about big lofty commitments. It’s got to be realistic and deliverable. We have to take people with us. If it’s something Labour are looking at I’m happy to discuss it.”

I speak to Hobhouse before the parliamentary debate and its paltry turnout. What happens next?

“We need to get this to the top of the agenda. Currently all we talk about is Brexit. Government is entirely frozen. We have to refocus our politics.”

Brexit does come into this however – with the EU arguably the best vehicle for tackling carbon change. “I have very little confidence that we’ll deliver on the environment if we Brexit,” she tells Left Foot Forward.

That’s an important ‘if’. Leaving the EU is not taken for granted by the Lib Dems. Does Hobhouse believe an ‘exit from Brexit’ is likely?

Until that potential second vote though, she believes: “It’s my democratic right to stand on the rooftops.”

Inside or outside the EU, there will be strong parliamentary opposition to reform – whether on climate change or modernising Parliament.

I speak to the Lib Dem MP two weeks after her upskirting bill finally passed, after initially being blocked by right-winger Christopher Chope. Its passage is ‘a victory’, she says, though she hopes that ‘ultimately we’ll see the phasing out of these types’.

Sadly when it comes to climate change, we may not have time to wait for ‘these types’ to leave Parliament. The upskirting bill only passed after a huge public outcry following Chope’s actions.

Thankfully, pressure is once again building to deal with the climate crisis – and there’s a few allies on the inside to turn those placards into policy.