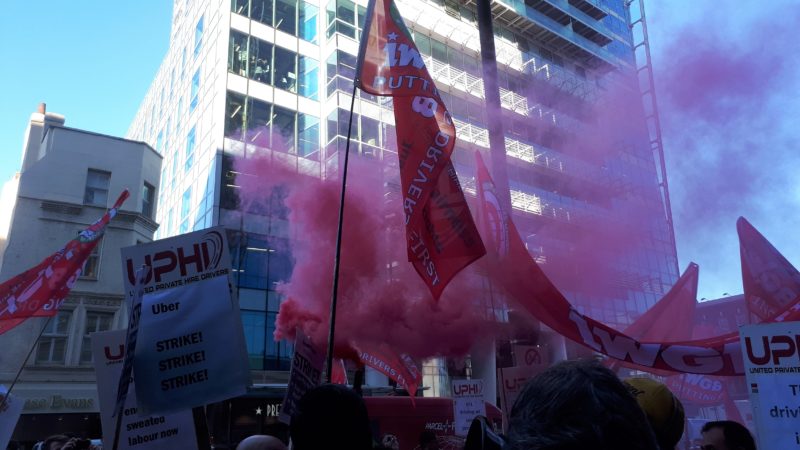 Uber drivers and campaigners out on ‘strike’ on Tuesday have attempted to occupy Uber’s central office in London.

The 24 strike, which began at 1pm, is organised by the Independent Workers of Great Britain and has seen Uber drivers in London, Birmingham and Nottingham go on strike. They are demanding an increase in fares, an end to ‘unfair deactivations’ of drivers, and that Uber respect recent rulings on worker rights.

The entrance to Uber’s headquarters was heavily protected by the police as crowds gathered outside the building chanting “shame on Uber”. Left Foot Forward editor, Josiah Mortimer, reported live from the scene where he spoke to one driver – Ahmed – who had been ‘deactivated’ by Uber then reinstated. He claimed the process was unfair:

“They’re not taking us into consideration. We need to know what’s going to happen. The app is our livelihood.

“When we can’t refuse rides, they’re forcing us to do a job. We are the government going to take action?” He said they are going to protest or ’strike’ again.

Many of the Uber drivers Josiah spoke to said they’d go on strike again and they were angry Uber were refusing to talk to them or even acknowledge them. They were demanding union recognition.

Police currently protecting entrance to the Aldgate tower building Uber are based in, as crowd chants 'Shame on Uber' #iwgb #strike pic.twitter.com/SDOVLmxREC

Left Foot Forward also spoke to an IWGB spokesperson who said Uber are ‘in denial’ about the campaign and haven’t responded to the strike.

Uber drivers in the IWGB union are demanding:

A spokesperson for Uber told this site that claims of unfair deactivations were ‘untrue’, saying they only stop people from being able to drive with Uber in ‘serious circumstances’ – for example over a serious safety incident, fraud, refusal to take a guide dog, or breaking the terms of their private hire licence. “Drivers are not deactivated simply for cancelling ‘a few’ trips,” LFF was told.

“An academic study last month found that drivers in London make an average of £11 an hour, after accounting for all of their costs and Uber’s service fee. We continue to look at ways to help drivers increase their earnings.”

The drivers say they plan to take action again. While no date for further action has yet been set, the IWGB and co-claimants Yaseen Aslam and James Farrar will be facing Uber at the Court of Appeal on 30 and 31 October on the landmark employment rights case. There will be a rally on the 30th.

See also: Why Uber drivers are striking this week