The Edinburgh International Book Festival (pictured) and many others risk losing out on the world's top talent, due to harsh Home Office rules. A taste of things to come? 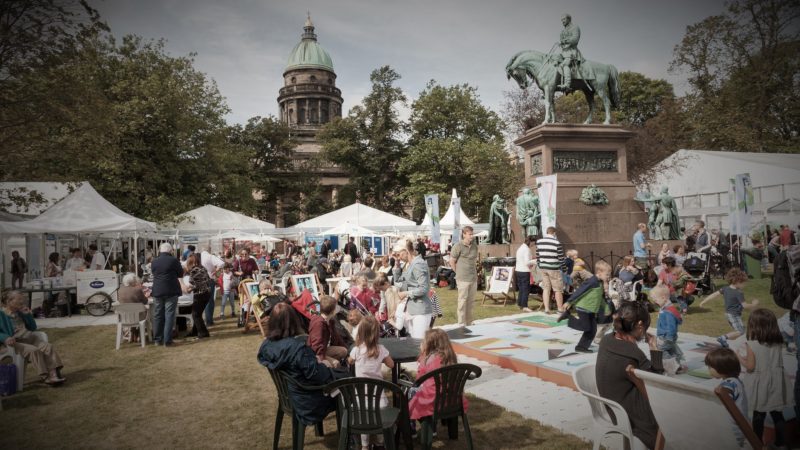 The arts community has been joined by the Scottish National Party in calling for an overhaul of the British immigration system, after the Home Office refused visas to leading authors at the Edinburgh fringe.

Those in the sector are warning that visa refusals are ‘starving UK arts festivals’ of talent – with the Home Office ‘killing off music’.

It comes after musicians were denied entry to the UK to play at Womad – an international music festival. Journalist Jon Snow tweeted:

The ‘hostile environment’ took its toll at Womad this weekend – a number of events were seriously affected by visa refusals. By definition a Festival of World Music requires visas for many bands. What on Earth is the Home Office doing refusing them? Is music the new enemy?

Now, in a letter published in The Guardian today, some of the UK’s leading festival directors write:

“As international arts festivals in the UK, we are very concerned by the rise in refusals of artists’ visas to perform at festivals, including the Edinburgh international book festival and Womad.

“The current visa application process for artists is lengthy, opaque and costly, with artists and/or festivals often spending thousands of pounds on visas and associated costs for a visit of often only a few days. The overly complex process leads to mistakes being made by both applicants and assessors, and refusals being made for visas that could theoretically be granted.

“Artists have to surrender their passport while the application is considered. Although the Home Office aims to complete most visa applications within 15 working days, applications can take much longer. There is no way for the inviting festival to find out the progress of a visa application, or answer any questions that arise, leading to refusals where missing information or documentation could easily be provided.

“The UK has a rich history of hosting the best artists from across the world, and these refusals directly reduce UK audiences’ opportunities to see and engage with international artists. We request that the UK government considers these changes to ensure the free flow of arts and ideas into the country.”

It is signed by Nick Barley – artistic director of the Edinburgh international book festival, Chris Smith – Director of Womad, and 24 other directors and festival executives.

The directors are calling on the UK government to alleviate the visa process, so that festivals can continue to attract the best world talent across the arts.

The SNP’s Deidre Brock – who is MP for Edinburgh North and Leith, where the annual Edinburgh International Book Festival is held – backed the calls for an urgent overhaul of the UK government’s ‘hostile’ immigration and visa system.

“Scotland’s international festivals are world-renowned, but the UK government’s damaging immigration policies are undermining their success, harming our international reputation, and putting the huge benefits to our economy and society at risk.

“The appalling debacle over visa refusals for leading artists is just the latest example of the damage the UK government is doing with its hostile approach to immigration – deterring the world’s best talent from attending our festivals, which risks making them less attractive to tourists, and restricts access to the arts for people across the UK.

“Under the Tories, the UK’s immigration system is broken and desperately needs fixing. The UK government must take heed of these calls for reforms to the visa system to ensure our international festivals can remain truly global.”

The SNP are calling for full devolution of immigration powers to ensure Holyrood has control of the situation – not Westminster.

They might want to grab those powers before Brexit happens…