Last week, people hit by benefit cuts staged a dramatic demonstration on a train to highlight the impact of austerity. They have one aim: to raise hope. 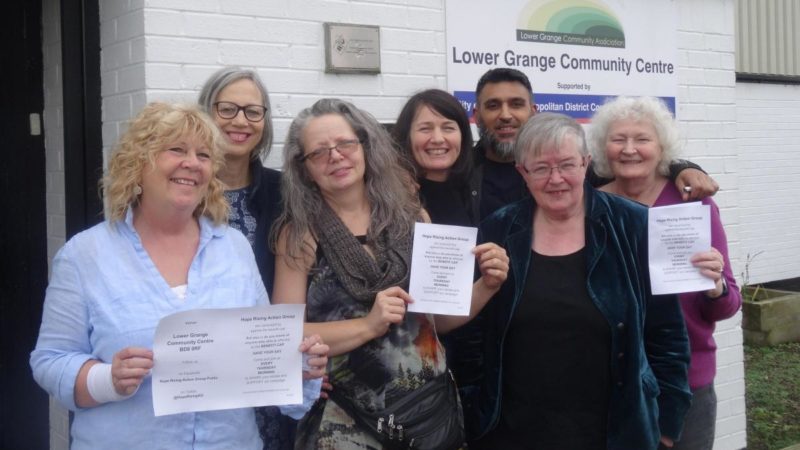 On a packed train from Leeds to London last month, passengers (including me) were met with an unexpected sight: demonstrators filling the carriage to highlight the effects of austerity.

These weren’t professional protesters. They were residents of Bradford, one of the poorest areas in the country, singing to raise awareness of a shocking effect of benefit cuts – people going hungry in the UK.

Afterwards I spoke to Julie Longden, a community development worker in the Lower Grange estate in Bradford, who helped found the Hope Rising Action Group.

Lower Grange is a solid Labour area, and one that faces high levels of deprivation, according to census data.

Julie Longden – herself brought up by a single mum on benefits – has worked in the poorest neighbourhoods in Bradford for 25 years. She has seen the effects of austerity since 2010:

“Women are coming into community centres with their money being taken away from them,” she tells Left Foot Forward, referring to the effects of the benefit cap and sanctions.

They face cuts with ‘so little notice – and no family. They’re trying to get jobs, trying to feed their kids.’ But the benefit cuts have put them in a ‘scary and impossible situation’.

The local community centre decided to start talking to people and get together.

“I didn’t want them to be alone. I wanted them to know not everyone wanted to go along with what was happening.”

There were about 50 at first meeting in January 2016 – all telling their stories. A core of around 15 now run the Hope Rising Action Group.

“It’s a mix of people affected by benefit cap and allies – people currently poor, raised poor, middle class people who are left-wing and who care. We work together.”

Now they are focused on building a local movement, reaching out to other groups. And they are starting from the ground up: “It’s our community, we live here.”

But the campaign also has another message: to show working people elsewhere that there is power in standing together.

“We want an end to austerity – we don’t believe it’s necessary. It’s being used as a way of sustaining status quo – keeping poor people poor and rich people rich.

“We want the system to come down: it’s not working for us. We want working class people to know they’ve got power.”

But in the here and now, there are policies to fight. In 2016 it was estimated that nearly 320,000 children would be affected by the benefit cap. The Guardian reported at the time that in some cases families have lost up to £115 a week, pushing them into deeper poverty.

The benefit cap limits benefits to £23,000 a year in London and £20,000 elsewhere for those with children. Longden notes that the cut-off meant that families had income suddenly slashed – putting people on the verge of homelessness.

Longden believes the cuts stem from a stigmatisation of benefit claimants:

“If you’ve got more than two kids, [this is] your fault was the narrative. They should have warned people – but they did it to people who had five kids whose husbands had left them.

“But nobody made a fuss about it…The Labour party didn’t stand up against it. I’m staunch Labour but I’ve lost hope. We have to do it ourselves. We can’t rely on others.”

The campaigners have been meeting policymakers in Bradford council, after Discretionary Housing Payments to those struggling were rejected. The group’s work challenged their attitudes: “It shook up Bradford council.”

Now the campaigners are speaking out across the region, trying to get poverty on the agenda.

Yet it’s a catch 22 – they need to protest, but the odds are stacked against them: “We’ve only got two hours a week together [to meet]. They’re all parents. It’s hard. We haven’t got a penny.”

Getting fellow residents to take action can be difficult too: “People are so weighed down with shame and humiliation – they haven’t been able to speak up in a working-class city. They are frightened of being attacked.”

Last week’s vocal takeover of the LNER train was funded by the Common Wealth theatre company, who have a pot to support working-class communities, and introduce ‘a bit of drama into the city’.

Hope Rising are now planning a conference next year on poverty, facilitated by the people hit by austerity.

“We want to bring together poor people from lots of different sections of society – the LGBT community, asylum seekers, the working poor.

Sarah Dawson, who is retired, got involved in the group after realising the city is ‘on its knees’. “So many poor people are not able to survive.”

Demand for foodbanks in the city is surging, due to the impact of poverty pay, sanctions and benefit cuts. When even the foodbanks run out of food, ‘then you are looking at starvation,’ she says.

What needs to happen? “I’d like to see the wealthy paying a lot more tax – and that money being paid into benefits,” says Dawson.

For Julie Longden, this is about raising hope.

“We want other people to know we’re fighting back. They’re not alone.”

My train from Leeds to London has just been taken over by protesters angry at benefit cuts and children and families going hungry. RT: pic.twitter.com/LjzdPorujy