The 2016 referendum exposed deep fault lines in our society. Rather than working to repair them with education and an emphasis on economic prosperity, the government has allowed divisions to fester. There is a now a real danger that this political failure could create space for the rise of the far right. 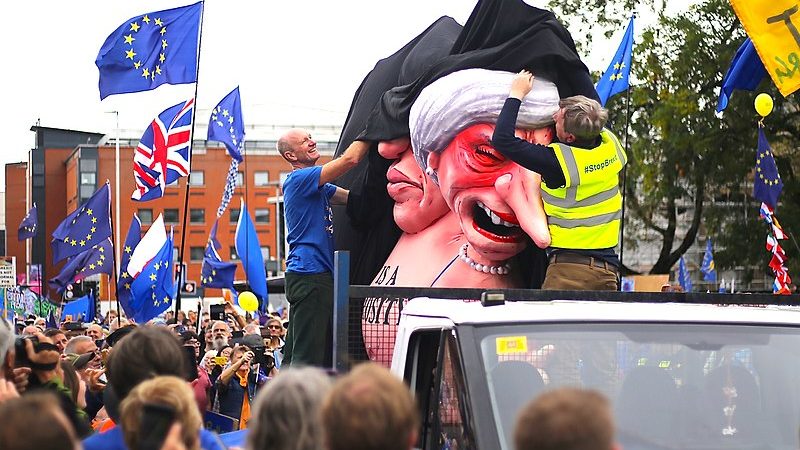 The Conservative government’s Brexit strategy is in disarray today, as ministers continue to abandon the sinking ship.

It appears there is little prospect of any coherent deal between now and next March. Although the government has had two years since the referendum to address Brexit issues, it has failed even to secure agreement in the cabinet.

There is a now a real danger that this political failure could create space for the rise of the far right.

So how did it come to this? The problem started with the 2016 referendum itself, which was called without any plan, strategy or consideration of the implications. A commission was not even established beforehand to consider the ramifications of the monumental vote.

The referendum outcome exposed deep fault lines in our society. Out of the 33.5 million votes cast, 52% voted to leave the EU and 48% voted to remain. The Leave vote exceed the Remain by just 1.3 million. Nearly 12.9 million people did not vote.

With devolved government and aspirations for independence, Scotland voted to remain within the EU. Northern Ireland too voted to remain in the EU. England and Wales voted to leave. This makes a single UK solution to Brexit difficult. The Good Friday agreement for Ireland with commitment to have no border between North and South adds extra complications.

People voted Leave for a variety of different reasons. Some were persuaded by propaganda which promised that outside the EU, the UK would be able to make greater investment in in its public services, particularly the NHS. Some analysis suggested that the economically disadvantaged used the referendum to give the establishment a kicking. Older people mostly supported the Leave campaign whilst the economically mobile voted to remain in the EU. The referendum also exposed a much darker xenophobic side of life, with Johnny foreigner blamed for all the UK’s social ills.

The country is now divided and polarized across nations, age, education and income and wealth distribution patterns. It is hard to see any consensus in parliament and across the country for any particular Brexit strategy. This is due to the government’s failure to provide any leadership. The polarisation has been allowed to fester. There has been no programme of social reconciliation or public education about EU membership or what it would really mean to leave.

Despite a large protest vote by the economically disadvantaged there has been no government move to address structural problems, for example to raise wages or investment in depressed areas. It could easily have moved government offices from London to the regions to create jobs, but did not do so. Its answer was austerity and tax cuts for corporations and wealthy elites, which further deepened social divisions and seemed to confirm suspicions that the government does not care.

Many opinion polls have suggested support for a second referendum and some have argued that the government’s final package deal negotiated with the EU should be put to a referendum i.e. people need to decide whether to accept the exit deal or remain in the EU. This would require consensus across the main political parties, which is by no means certain.

Some say that the 2016 referendum was based on misinformation, and it was, but there is no guarantee that the next referendum would be pristine or people would necessarily vote directly on the question posed on the ballot paper. The condition of the economically disadvantaged has not changed and they may well vote the same way as before.

Suppose the second referendum results in a Remain vote by a small margin of say 52:48, wouldn’t that then encourage the Leave campaign to demand another vote? Thus, there is a prospect of never-ending referendums. Whatever the outcome, a large proportion of society will be dissatisfied with it. Where would the 48% who then can’t secure the third referendum go? They are likely to become disenchanted with the main political parties and the political system. This would open the door for the parties of the far right and could lead to a resurgence of UKIP, the National Front and others. This could unleash turmoil in the not too distant future.

Public opinion over EU membership is likely to remain polarised for the foreseeable future. The political parties need to perform complex juggling acts. They know that to win the next general election and form government they will need to win parliamentary seats in areas that voted heavily to leave the EU. Therefore, antagonising voters in those areas would be counterproductive. That restricts the space they have to manoeuvre over Brexit strategies. Political parties will find it difficult to satisfy all social constituencies.

Nevertheless, people need jobs, economic prosperity and security, and that provides the key to securing any deal with the EU. The UK is part of Europe and its future is inextricably linked to Europe. There is little point in doing trade deals with the US, China or India when the biggest market is just two hours train ride from London. The emphasis on economic prosperity rather than nationalism can help to weave a way through the quagmire.