Academies and schools are making tortuous calculations in order to get away with paying the bare minimum - in a county where rents and house prices are astronomical. 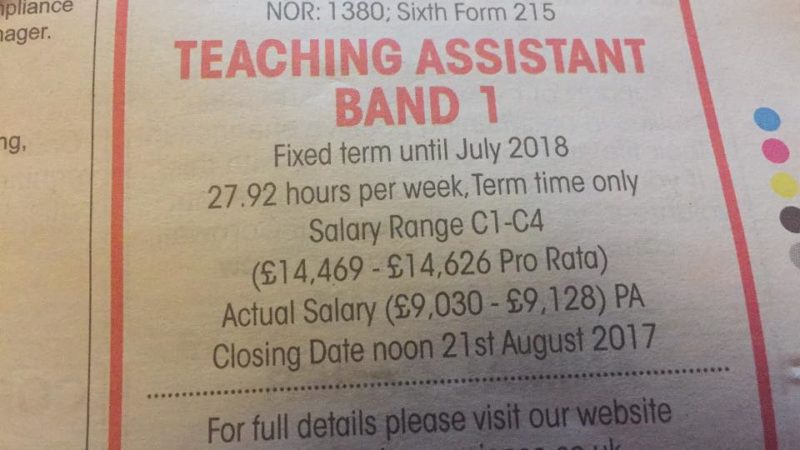 On Wednesday, I shared a job listing I’d seen in a local newspaper on Facebook. It was for a teaching assistant’s job in one of our large Cornish academy schools – and it says a lot about poverty wages in Britain.

For a 27.92 hour working week, the advertised pay was from £9.030 per annum. Considering this is term time only, and taking holiday pay into account, my calculations make this £7.44 per hour – £7.50 at a push, if a 38-week academic year is used and holiday pay calculated pro rata.

At the time of writing, my post has been seen by over 30,000 people. 350 have reacted to or commented on it. People are obviously concerned about poverty wages in Cornwall. So am I.

Teaching assistants have huge responsibilities. They require areas of Special Educational Needs expertise, they have NVQs or even degrees, they cover classes and deliver lessons, and they often teach groups of children.

The job is advertised at 27.92 hours per week. It is fixed term until July 2018. This is the worst type of creative recruiting.  Who pays for 0.92 of an hour rather than rounding it up? This figure is calculated by paring off every part of the school day that can conceivably not be paid for (lunch, breaks), presumably to engineer an exact fit to the minimum wage. Making the post fixed until July 2018 means not paying over the summer holidays.

What it tells us is how tight funding for education has become. Schools are paying their staff the absolute minimum they can get away with. Wages are cut to the bone. The schoolcuts.org.uk website informs us that the school in question is due to suffer a drop in its budget of £880,051 by 2021. That is £780 down per pupil or, at these wages, 97 teaching assistants.

A deficit exists in national funding in education. Worryingly, the advert shows us that schools are making choices to make up the numbers using the wages of the most vulnerable.  Many of these workers are women. There is much competition for school-hours jobs that fit in with looking after children. And the rules of supply and demand mean that employers can take advantage of this by paying the barest minimum.

Some of the comments on my Facebook post stated that schools are now employing young ‘apprentice’ TAs on £3.50 per hour. Educating children is one of the most important jobs in a society. Why is it so little valued in the UK?

Poverty wages are not a problem specific to education. Wages across many sectors, particularly in Cornwall, are scraping minimum wage. A cursory glance across the rest of the jobs page this week showed at least two others with annual salaries of just over £15,000. This works out at less than £8 per hour. The Living Wage Foundation has recommended a Living Wage of £8.45 outside London. And while Cornwall Council pays the Living Wage as part of a deal reached with unions, outsourced bodies or academies don’t have to.

According to Rightmove, the average sold house price in Cornwall is £250,000. This is over 16 times that wage – and so is impossible to aspire to for many. Rents are just as bad. The average rent for a house in my home town Falmouth is £1166 per month. If you only earn £15,000 that would leave you with £84 per month to pay for everything else. There is a desperate disconnect between wages and housing costs here.

Child and working tax credits try to fill the gap and have enabled employers to pay poverty wages. But even they will be changing when Universal Credit is rolled out here between December 2017 and March 2018. The Trussell Trust say that they have to provide 73,645 more three day food parcels nationally this year than last and this looks set to worsen.

Labour rightly intends to raise the minimum wage for everyone over 18 to £10 per hour, and remove the public sector 1% pay cap. But even £10 per hour would not be enough. The gap between wages and living costs in Cornwall has become so vast that we need to start thinking radically what we are going to do about it – before homelessness and poverty become endemic.

5 Responses to “Teaching assistants are earning the minimum wage. We need to talk about poverty pay”