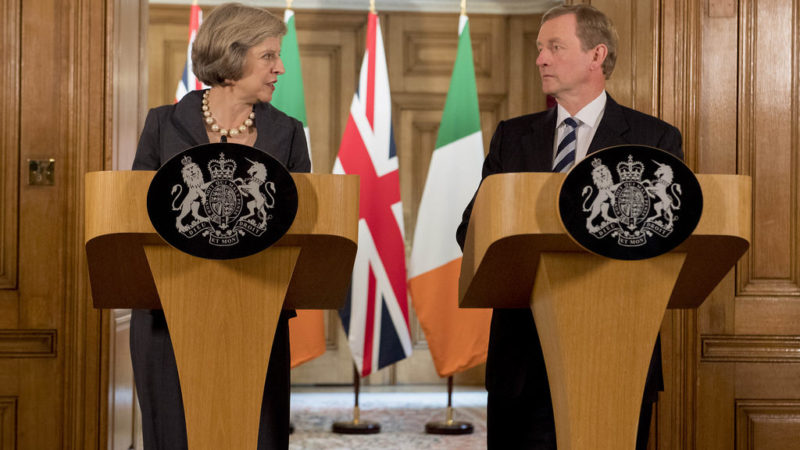 As the general election campaign continues in the UK, another contest going on in Ireland could have just as much significance for the future of the country.

Earlier this week, Taoiseach Enda Kenny announced that he was resigning almost immediately as leader of the governing centre right Fine Gael Party, and would step down as head of government by the second of June, once a successor had been chosen by his party.

The decision comes following a disappointing General Election result last year, which saw Kenny’s party fail to secure a majority in the Irish Parliament and criticisms about the way in which he has handled a police scandal.

Responding to Mr Kenny’s decision to step down, Theresa May declared him to have been ‘a strong and consistent friend to the UK’. With friends across the EU in short supply, what then can be expected of Mr Kenny’s potential successor when it comes to Brexit, especially the tricky issues of Northern Ireland’s border with the rest of Ireland?

According to the Irish Times, the 38-year-old Minister for Social Protection,  Leo Varadkar, has an early advantage, securing the most support from Fine Gael parliamentarians.

Varadkar, whose father was born in Mumbai, was first elected to Parliament in 2007, being appointed to his current ministerial post just last year. He has previously held the positions of transport and health minister and came out in 2015, becoming Ireland’s first openly gay government minister.

Speaking last year, Varadkar expressed his support for a vision of a united Ireland, but warned that using Brexit as an opportunity to make a ‘land-grab’ for Northern Ireland would be counterproductive.  He argued instead that unification could be achieved only through ‘respect and consent’ and by accepting the identity of unionists and ‘finding a special place for them to thrive’.

However, he has also made clear that it is not the responsibility of the Irish government to fight ‘England’s battles’ for it on Brexit.

Earlier this week, the Irish Independent reported that if successful in the leadership contest, Varadkar will seek a special arrangement to keep Northern Ireland within the single market to ensure an ‘invisible’ border between the north and the rest of Ireland.

Varadkar’s main rival for the leadership is set to be the 44-year-old Housing Minister, Simon Coveney.

In December last year Coveney warned that the Irish government would not allow itself to take sides between the UK and the EU in the Brexit discussions, arguing that it would instead prioritise looking after Irish interest firsts.

As Theresa May however called the snap election in April, he warned that the power vacuum it left was another reason for Ireland to maintain a ‘firm position’ on Brexit.  Speaking to the Irish Examiner, he concluded that Theresa May’s expected victory could ’embolden’ her to negotiate harder during upcoming talks on Brexit.

2 Responses to “Ireland is about to get a new prime minister – what does that mean for Brexit?”