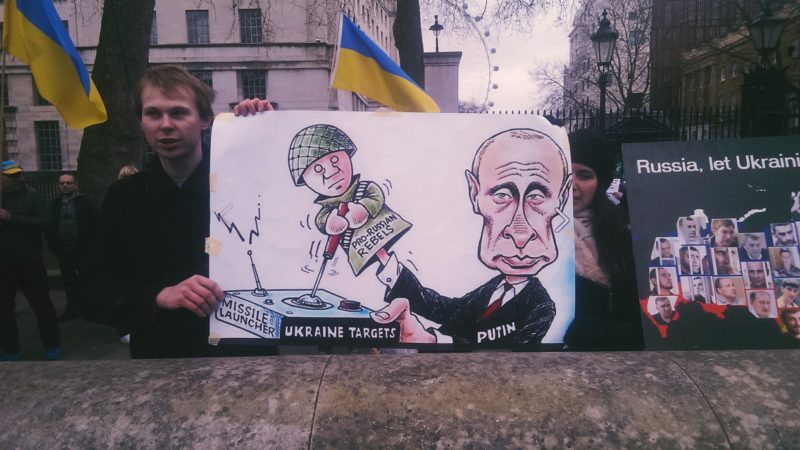 Ukrainian activists are calling on Theresa May to support Ukraine in its ongoing war with Russia, warning Vladimir Putin is a threat to ‘the whole of Europe’ and the United Kingdom.

At a demonstration outside the Prime Minister’s home in Downing Street yesterday, Londoners of Ukrainian heritage demanded tougher sanctions on Russia and more military and humanitarian aid to Ukraine. 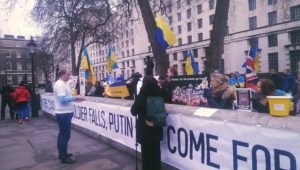 It comes amid renewed fighting between Russian and Ukrainian forces in the town of Avdiivka, where shelling last week has left residents with no water, heat or electricity.

Stephan Shakhno, spokesman for Euromaidan London, which organised the protest, said the Minsk ceasefire deal Theresa May cited in her press conference with US President Donald Trump has been violated by Russia.

“The Minsk agreement is in shatters. The Russians have never really upheld it. There should have been a ceasefire two years ago, and the Russians keep on shooting, and they always blame it on us.

If the Russians stop shooting, the war will end. If Ukraine stops shooting, Ukraine will cease to exist.”

He said the UK is a guarantor of Ukraine’s security under the Budapest Memorandum on Security Assurances, signed by Britain, Russia, the United States in 1994, which saw Ukraine give up its nuclear weapons in exchange for protection against the ‘threat or use of force’.

Shakhno said current sanctions have ‘failed to stop Russia’ and called for assets held by Putin-linked oligarchs in Britain to be frozen.

“We know there are all these Russian oligarchs here who are Putin’s cronies,” he said. “They keep their billions in London. A very effective way would simply be to freeze their assets until Russia pulls out their troops from Ukraine.”

Russia should be kicked out of the Society for Worldwide Interbank Financial Transactions (SWIFT), he said, and Ukraine’s border should be monitored 24/7 by an international peacekeeping mission. 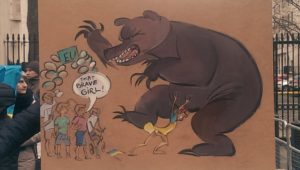 Shakhno said activists were also calling the UK to provide more humanitarian and military aid to Ukraine. He said:

“Ukrainian soldiers, of which already 10,000 have lost their lives, they are protecting not only Ukraine but the whole of Europe, and the UK as well. Because it’s not Ukraine that is the primary target of Putin.

As we have seen now, with him meddling in the United States, and France now in the elections, his main enemy is the west – the democratic nations. He tries to destabilise all democratic societies.

He killed democracy in Russia […] and he tries to export his model to the other countries.”

Shakhno said RT is ‘a mouthpiece of Russian propaganda. They are spreading fake news.[…] They are brainwashing people.’ Ofcom found in September 2015 that RT had breeched impartiality rules but the channel still has a broadcasting licence.

Vlodko Pawluk runs a community centre, the Association of Ukrainians in Great Britain’s branch in Holland Park, west London, and spoke at the protest. He told Left Foot Forward, of the three-year conflict:

“It’s called the forgotten war, but it should not be forgotten. It’s in the centre of Europe.”

British Foreign Secretary Boris Johnson told reporters at an EU foreign affairs council meeting in Brussels today there is ‘no case for relaxation’ of sanctions on Russia.