Jayaben Desai reminds us that stereotypes are there to be smashed 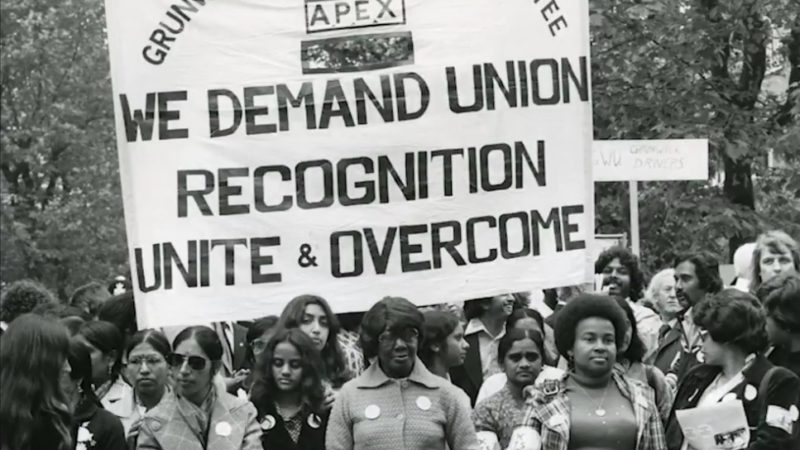 GMB hosted a fringe event at TUC Congress this afternoon, marking the 40th anniversary of the Grunwick strikes and launching the union’s commemorative exhibition. This blog originally appeared on Stronger Unions.

The striking women at the Grunwick factory remind me potently that trade unionists, and trade union leaders, come from all walks of life. As a South Asian woman trade unionist myself, the story of Jayaben Desai continues to have a deep resonance.

We do not always choose a life of activism, but circumstances – working conditions or the injustice we experience – propel us into a life of activism. The working women who went on strike, led by Mrs Desai, in 1976, are a reminder that the trade union movement is one of the most diverse and dynamic.

It will be 40 years since the Grunwick strikes this year, and the lessons of that dispute are a timely reminder of the core work of trade unions.

In these uncertain times following the EU referendum, and when migrant workers are some of most vulnerable, demonised and stigmatised in parts of the media and  politics, Grunwick reminds us why it is critical that the union movement comes together to fight for the rights of the most vulnerable workers.

The Grunwick processing factory, which processed black and white and colour photographs for individual and business customers, took on many migrant women workers in the 1970s, mostly Indian women from East Africa. Many of these women had fled to the UK due to persecution by the governments of Kenya and Uganda.

The workers at Grunwick recall a climate of fear and control by the managers at their workplace. The management of the factory refused to give union recognition. Some workers who had joined the Transport and General Workers Union (TGWU) were made redundant.

Workers complained about having to ask for permission from management before they were allowed to go to the toilet.

The management severely underestimated the women workers. More than 100 led by Jayaben Desai walked out in August 1976 in a dispute that lasted for almost two years. It attracted the support of thousands of ordinary people, made news headlines every night and was even debated in parliament.

Black and Asian workers had been ignored for a long time, finally Grunwick placed them at the centre #TUC16 pic.twitter.com/Aw8MV9vYsY

After Jayaben and her co-workers spent some months picketing outside the Grunwick factory, the cause of the Grunwick strikers was taken up by the wider trade union movement of the day.

By June 1977 there were marches in support of the Grunwick strikers, and at its peak there were days when 20,000 people packed themselves into the narrow lanes near Dollis Hill tube station. Three government ministers (Shirley Williams, Fred Mulley and Dennis Howell) joined the picket line.

This came at a time when racial tension was high. In 1968 Enoch Powell had made his infamous ‘rivers of blood’ speech. In it he warned of what he saw as the catastrophic consequences of continued immigration of people from the Commonwealth.

While he may have lost his shadow cabinet job, he got 10,000 letters of support and London dockers marched to express their agreement.

The Grunwick strike was the first time that black or Asian workers were at the forefront of industrial action. Hitherto trade unions were led by white men, and women workers as well as non-white workers often found it very hard to win support.

It was the first time the figurehead was a South Asian women. At a time when the country was in the midst of great racial polarisation, the image of Mrs Desai was a subversive reminder that migrant communities could be – and were – strong leaders.

Support for the striking workers gathered pace both within government and the wider union movement. The Union of Postal Workers supported the Grunwick strikers’ cause and on 1st November 1977 the union voted to boycott postal services to and from Grunwick.

With this support victory seemed to be within the grasp of the striking women. The government committee looking into the issue recommended that Grunwick management recognise the union.

But despite the level of support both within the union movement and some sections of government, the Grunwick management refused both the government and ACAS’s recommendations. Union support was also divided when Mrs Desai and other striking women went on hunger strike.

But there is much to learn from the Grunwick dispute. Mrs Desai’s example shows the union movement is a broad church of working people representing all walks of life. Activist leaders have a huge breadth of experience and Mrs Desai reminds us, gloriously, that stereotypes are there to be smashed.

Much like the women factory workers who went on strike at Ford Dagenham fighting for equal pay, Grunwick workers challenged the union movement.

They challenged union leaders to think about how they needed to change to represent the diversity of workers’ voices. Mrs Desai, a tiny figure, with baton-armed police surrounding her, managed to gather thousands of trade unionists in support of the industrial action.

She projected a completely different face of the trade union movement. Indeed, Black and Asian workers had been ignored for a long time, and, finally, Grunwick placed them at the centre.

Huma Munshi leads on disability and LGBT equality policy at the TUC.

See: ‘Where we agree with your policy, we’ll support it’ – TUC boss offers olive branch to Theresa May