They're striking to protect patients from the government's dangerous policies 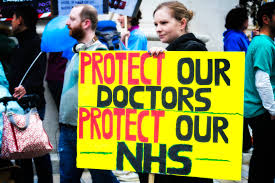 5,000 operations cancelled and another 48 hour doctors strike. Not traditionally the kind of headlines that win public support, but this is no traditional battle.

Although the junior doctors contract on now on their third strike, public support remains high with 65 per cent supporting the strike and only 17 per cent opposing it. It’s not often that strikes command such strong and consistent public support.

Jeremy Hunt has an interesting approach to politics. Pick a fight with one of the most respected and supported professions in the country, doctors, by proposing policies which threaten a popular national icon, the NHS. It was never going to go well. 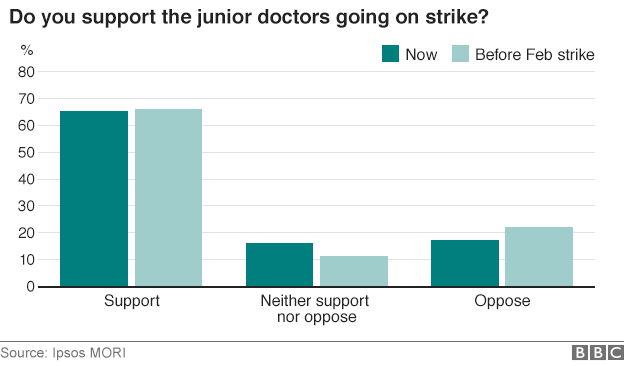 It’s no surprise then that according to Ipsos MORI polling, over half the country blame the Government for the dispute with just over 10 per cent saying it is more doctors’ fault.

The perception of a Government at fault wasn’t helped by the decision by Jeremy Hunt to abandon further negotiation and unilaterally impose the new contract on junior doctors.

The dispute has far wider ramifications for the NHS than just doctors’ terms and conditions. The principle behind improving weekend care is good; I’d welcome any steps to improve care any time of the week.

Jeremy Hunt’s conduct however has been appalling; his willingness to misrepresent statistics, claiming that patients are at risk at weekends as a result of doctors refusing to work is particularly contemptible.

As Kailash Chand, the deputy chair of the British Medical Association said, if Hunt was a doctor he’d be facing serious questions about his fitness to practise. Particularly when leaked reports from his own department make clear that it is impossible for them to say if more staff would lower death rates at weekends.

Indeed, as the BMA and junior doctors have argued throughout, staffing hospitals at weekends with exhausted, overworked doctors is not the way to improve safety, quite the opposite.

No matter how much the Government tries to pretend, this dispute is not about pay. While doctors are quite rightly demanding financial recognition for working on weekends, they have also said they are willing to reduce the core pay they are given to help meet the costs.

For many doctors, being forced to work weekends for the rest of their life is simply not what they signed up for.

The NHS is a wonderful thing but it is, by definition, a monopoly employer, with junior doctors having very few other options than to work for it. Normally when both sides are willing to compromise, this is no problem. With a dictatorial Secretary of State willing to fundamentally rewrite contracts and increase pressure on doctors it can quickly lead to a breakdown.

For many doctors, the contract is just the tip of the iceberg. Context is important. In the capital for example, we’ve seen all but one of our A&E units missing waiting time targets, with 11 of the 19 Trusts failing to meet the target every single month since monthly statistics began in June 2015.

We face warnings that one in five GP practices will shut in the next few years due to lack of staff, and at the same time that spending on agency staff has rocketed under this Government, now costing the NHS £2.8bn nationally.

It’s not hard for doctors, who are already being stretched to their limits, to see the latest attempt to water down their working conditions and increase their working week, as the straw which will break the collective camel’s back.

There is of course one clear alternative for doctors who’ve had enough – leave the country. This is exactly what a growing number are opting to do, particularly in light of the generous packages, better conditions and increased training and support offered in some other countries.

With an ageing population of doctors we need to retain the talent we have not increase workloads and reduce conditions to the extent many feel they have to consider leaving the country entirely.

The public wants politicians to be honest with them. Jeremy Hunt’s attacks on doctors, misuse of statistics and aggressive approach to this dispute has shown the Government’s hand. Its clearer than ever that this new contract is little more than a cost cutting exercise which will put even more strain on already overworked doctors and thus put patient safety at risk.

A Health Secretary is meant to be there to improve the NHS and above all, protect patient safety. No matter what Hunt may say, doctors aren’t striking today over money, they’re striking to protect patients from dangerous policies which Jeremy Hunt seems all too happy to push through.