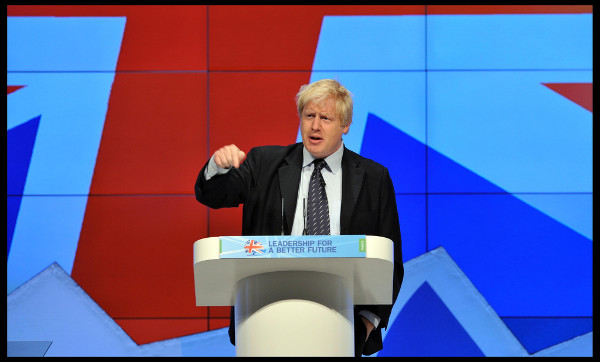 As David Cameron prepares to face MPs for the first time since calling a referendum on EU membership, all eyes are on the Tory ministers campaigning against their leader for Brexit. But it’s hard to escape the feeling that the Gang of Six plus Boris Johnson are, in the mayor’s own words, ‘veering all over the place like a shopping trolley’.

Indeed, the statements made prominent Tories over the weekend lay the groundwork for a scatter gun campaign, in which individual political priorities overwhelm any strong collective message.

Johnson’s main priority, many suspect, is his own path to Number 10. Accordingly, his rhetoric has focused on how the EU limits British power.

“You’ve got a supreme judicial body in the European Court of Justice that projects down on this entire 500 million people territory a single unified judicial order from which there is absolutely no recourse and no comebacks. And in my view that has been getting out of control.”

There are also questions of whether out really means out to Johnson; his Telegraph column implies that a Leave vote might simply act as a bargaining chip for yet another renegotiation.

“The crisis in the eurozone and the migration challenge have led to calls for still more integration and a move towards much greater political union. It is a path that the UK will not and should not follow….”

However, Grayling’s criticism focuses on the threat of ‘ever-closer union’, a strange choice since one of the most successful parts of Cameron’s deal was Britain’s exemption from that provision.

Justice secretary Michael Gove’s statement avoided comment on divisive issues, such as immigration. He commented instead on the day-to-day limitations imposed on ministers by Europe.

“Every single day, every single minister is told: ‘Yes Minister, I understand, but I’m afraid that’s against EU rules’. I know it. My colleagues in government know it. And the British people ought to know it too: your government is not, ultimately, in control in hundreds of areas that matter.”

Employment minister Pritti Patel makes a similar case. Of course, the argument only holds if you are happy with the government in power. Remain campaigners on the Left argue that EU regulations protect British workers from some of the worst excesses of the Conservative government. One man’s ‘red tape’ is another’s entitlement to fundamental employment rights.

These arguments deliberately manipulate public misunderstanding of EU functions. Last year, polling from the High Pay Centre and the Friedrich Ebert Stiftung Foundation found that 82 per cent of people support the maintenance of existing rights at work, such as paid holiday and maternity leave, yet just 25 per cent correctly identified the EU as being the source of these rights.

However, while Johnson and Gove at least attempt some nuance, Work and Pensions secretary Iain Duncan Smith is determined that the Remain campaign won’t have the monopoly on Project Fear. He has warned that membership of the EU is a threat to national security:

“We have already seen how the Islamic extremists who planned and carried out November’s terror attacks on Paris exploited borderless Europe. Well, in the future, they could just as easily gain access to the UK.”

IDS clearly sees the referendum as an opportunity to continue his anti-immigration campaign, but both Number 10 and Britain Stronger in Europe have already marshalled a string of experts to contradict his claims on security.

Remain campaigners have also pounced on an admission of weakness from John Whittingdale who, in an interview primarily focused on migration, openly acknowledged the risks associated with Brexit:

“At the heart of my decision to support Leave is the conviction that our democracy should be strengthened.”

However, questions are already being raised about the compatibility of Villiers’s stance with her departmental responsibilities, since polling suggests that the country’s strongest Remain vote will come from Northern Ireland.

Although Leave now has the support of many big guns, the statements of Tory ministers show a fractured set of motivations and a lack of coherent and unified messaging, beyond the call to ‘take back control’. That’s before you add the views of even more divisive Outers, such as Nigel Farage, George Galloway, Lord Lawson, to the mix.

But crucially, these gaps in the argument can only affect the outcome if they are successfully identified and exploited by the Remain campaign.