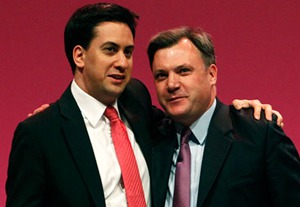 Financial Times commentators John Hutton and Alan Milburn have hit out at Labour today for failing to defend their economic record. They write that ‘the Tory charge against the last Labour government – that the economy was wrecked because the public finances spiralled out of control – is holding sway over voters’.

Balls and Miliband, they write, have ‘foolishly’ let the Tories claim this without opposition, despite the fact that the last Labour government ‘could be considered one of the most prudent of modern times’.

The fact is though, that both the Labour leader and shadow chancellor have defended their record, uncompromisingly, on numerous occasions.

In January 2014, Ed Balls appeared on the Andrew Marr Show in defence of Labour’s pre-crash spending:

“Do I think the level of public spending going into the crisis was a problem for Britain? No, I don’t, nor our deficit, nor our national debt – what happened was a global financial crisis which pushed up the deficit.

The question then was ‘who can get the deficit down?’ – George Osborne choked off the recovery, a recovery Labour had delivered but it wasn’t caused by public spending in Britain and that’s just the truth.”

Balls also told Marr in 2011 that ‘apart from the Tories, nobody thinks that spending caused this downturn. It was a global financial crisis.’

Meanwhile, Ed Miliband told the BBC in 2011 that ”

“And, look, all round the world … President Obama is facing a large deficit. He didn’t do that because Gordon Brown was spending too much.”

Both Balls and Miliband have been clear about the fact that they believe Labour’s main mistake regarding the economy was that banks were not regulated enough. At the Labour party’s annual conference last year, the shadow chancellor said:

There seems to be a prevailing impression that Labour are keeping silent on the economy because of a guilty conscience. Perhaps the reality is closer to this: the Tories, and the public, are choosing to repeatedly gloss over Labour’s defence because they provide such an easy target for blame.

20 Responses to “Labour’s defence of their economic record has gone unheard, not unsaid”