The government has pressed ahead with privatisation of the East Coast Mainline precisely because of its success. 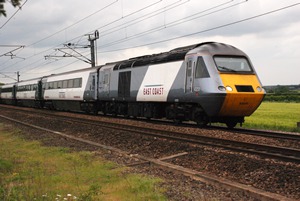 It should be obvious by now that privatisation has become an end in itself for this government. This was demonstrated last year by the rushed privatisation of Royal Mail, sold at a fraction of its worth despite bringing in a significant profit to the taxpayer as a state-owned company.

We are told that we live in straightened times where government money is hard to come by; and yet state-owned companies that are making not insignificant sums for the exchequer are hastily being taken off the books and handed to the private sector. In these supposedly non-ideological times ideology is regularly trumping pragmatism.

The latest example of ideologically-driven stupidity is the flogging off of the successful East Coast Mainline to a consortium made up of Virgin and Stagecoach. Despite the not-for-dividend operator returning some £800 million to the taxpayer in the last financial year, the government has been seeking to return East Coast to private hands as speedily as possible. Today they’ve finally done it.

The absurdity of selling off East Coast was summed up last year by former minister for transport Sadiq Khan, who pointed out that, without privatisation, the money made from line could be reinvested ‘for the benefit of passengers’ – as opposed to shareholders of course.

And at a time of poor train services and huge subsidies for private rail providers, since the East Coast Mainline was taken into government hands not only has it returned the service to profit but it has simultaneously delivered a high level of customer satisfaction, as these excellent graphs from Ripped-Off Britain demonstrate: 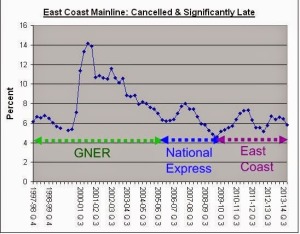 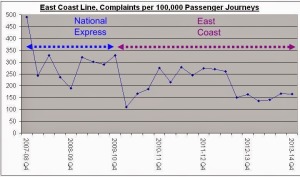 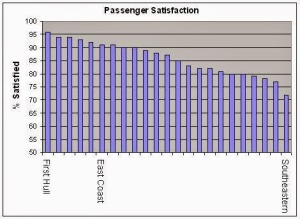 The scale of East Coast’s success is all the more impressive considering the service was previously abandoned by a failing private sector – first by GNER in 2007 and then by National Express in 2009. Just as the government cannot allow banks that are ‘too big to fail’ to sink without trace, so it could not permit the companies that run our trains to fail – the consequences would be just too severe. As should be obvious to even the most fanatical libertarian, the railways can’t be turned off for a week on the ideological basis of ‘letting the market run its course’.

Along with it’s other achievements, the success of the East Coast Mainline has also rubbished the idea popularised by big business that success requires eye-watering rewards. According to their annual report, East Coast’s CEO earned £224.8k in 2013. If this sounds a lot, consider that the average pay of a FTSE 250 CEO stands at £1.3 million – and that’s before bonuses kick in.

Yet despite all of this the government has decided to press ahead with the sell-off of the line. Although I suspect it’s more revealing to interpret this in another way: the government is pressing ahead with privatisation precisely because of the success of the East Coast Mainline.

Is there anything, after all, that’s more damaging to the Conservative privatisation agenda than an example of a people before profit service that actually works?

39 Responses to “The success of East Coast shows that another model can work. And that’s why it terrifies the government”