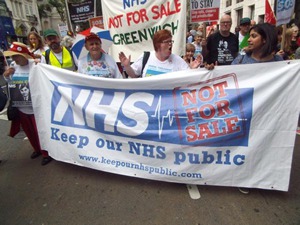 As a Londoner, a politician, a doctor and a parent it is my view that we must support Clive Efford’s private members bill today, to repeal the worst aspects of the Health and Social Care Act.

In just two years this unmandated and top-down reorganisation has fragmented our NHS. It squandered £3bn of tax payer money at a time when real term funding has been cut for five years; it has left our NHS on its knees.

The service is being forced to the brink of privatisation and is being pushed to engage in a race to the bottom, putting pounds above patient care.

Clive Efford’s bill today aims to save the NHS from complete atomisation, competition and what has been a privatisation by Jeremy Hunt in all but name.

I have always been open minded about reforming the NHS, but what happened two years ago was nothing short of vandalism.

The coalition’s Health and Social Care Act created an NHS that is open to complete unfettered free market competition. It asks doctors to manage huge commissioning budgets which they neither have the time nor the training for, and then blames them for all that is going wrong in the NHS.

Under this government’s ‘reforms’ NHS London has been replaced by 32 Clinical Commissioning Groups (CCG). This fragmented commissioning across London causes massive inefficiencies, internal conflicts and confusion. The NHS is fragmenting structurally and financially, none of which is good for the patients it is there to serve.

Under this government there is no trade protection for the NHS. There are fears that once the EU-US trade agreement is signed next year, US health care companies will have more power over the NHS than our own elected government.

Clive Efford’s Bill would rewrite the rules and stop the NHS being held to ransom.

It would remove the power of the NHS Monitor to act as a competition enforcer.

It would remove the NHS from any free trade partnerships and thus protect our health service from huge international competitors.

Finally, it would return responsibility of the NHS back to the secretary of state for Health, reinstating democratic accountability for the decisions made in our health service.

This bill is about protecting the NHS as a unified service to all, free at the point of need regardless of income or ability to pay. It is time we took back our NHS.